The 2022 Berkshires to Beaches expedition just finished up an exciting few days camped on the Housatonic River! The last time you heard from us we were on our way south coming from the Deerfield River. The first afternoon we arrived at our campground, which had beautiful waterfront views and the kids got to work setting up camp. After we ate a quick dinner, the kids decided to throw a line out on the water in front of camp after we spotted some rising fish. Within the first few minutes, we heard many excited calls of “fish on” ringing across the water. The kids fished until dark, bringing in a variety of smallmouth bass and trout. 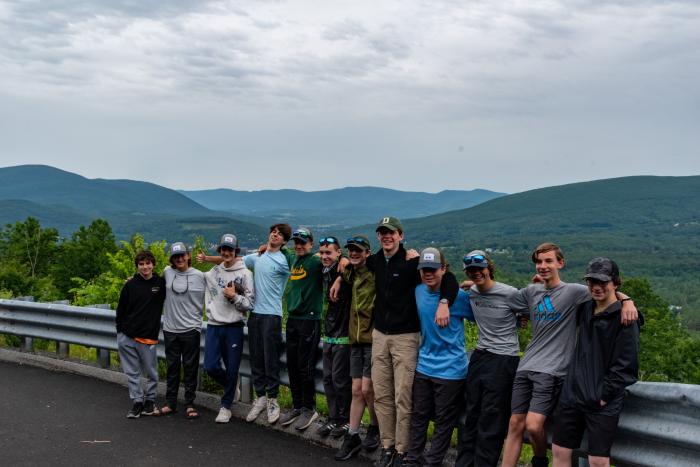 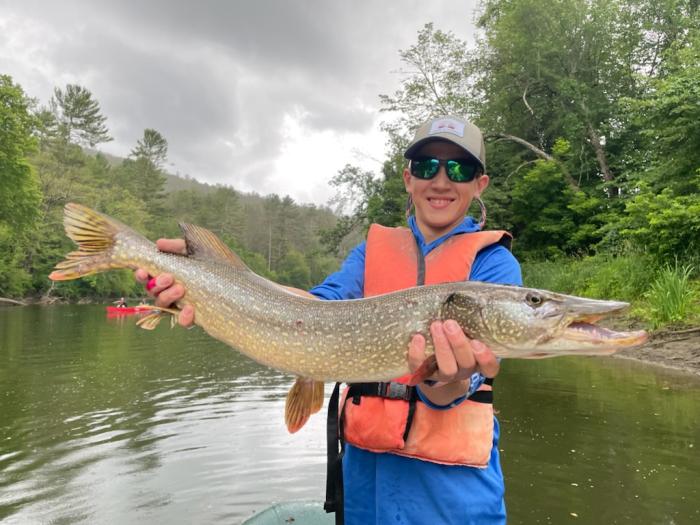 This great start to our time on the Housatonic was a nice indicator of what was to come in the next few days. The next morning the kids woke up early to split into two groups.  Both would have a half-day float in our canoes and drift boats on the Housatonic for pike and bass, and a half-day wade fishing some secret spots for smallmouth and rock bass. Both groups had the massive success that day with every single kid landing multiple fish with some bringing as many as 30 to the net using exciting techniques like topwater poppers. One float group was also rewarded for their hard work with an elusive northern pike landed as well. All the kids got back to camp exhausted after a full 10 hours of fishing and settled in for some well-deserved dinner and s’mores around the campfire. Over the campfire, we made plans for the following day with the help of our student leaders of the day.

The next day the kids were given two options to decide between: do a full day pike float of the Housatonic, or explore some new wade fishing areas. We had an even half and half split, with both groups having another great day on the water. The wade fishing group went on a beautiful hike on a section of the famed Appalachian Trail down to some beautiful smallmouth bass and trout water and had good success catching fish before heading back to relax around the campfire, fish some more around camp, and get ready for the next day. The float group had an awesome day too with several pike landed and upwards of 20 fish spotted following flies in. The float group also had the chance to fish for bass and trout, and some kids landed as many as 4 separate species of fish on that float alone! Our kids have probably caught 300 fish in the past few days, and spirits are high! 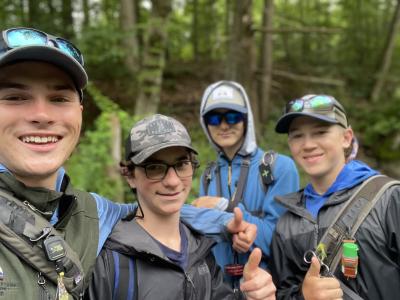 This morning we packed up camp and hit the road early in an effort to avoid the infamous Friday traffic on our way out to our next campsite on Cape Cod. We will be making a few fun stops on our way out, and everyone is super excited to get out there and get on some striped bass! We have a fun next few days planned out fly fishing the flats with the help of some local guides, and the weather is looking great. We will send out another update soon before we move campsites again to get ready for the charter trips.

Will, Jack, and William