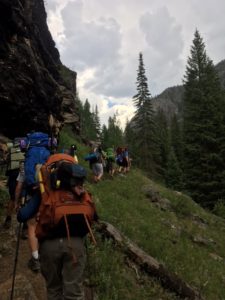 The trek into the high country." /> 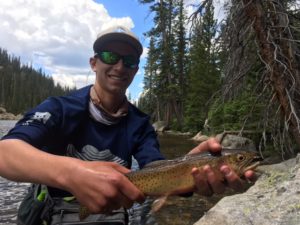 Today we hiked out of the North Inlet backcountry near Grand Lake Colorado, and oh boy what a four days we had in the woods!  On Friday we started our hike with unusually hot weather for the mountains, but the heat quickly subsided and gave way to the typical afternoon thunderstorms common in Colorado.  We tried waiting out the rain, but decided we would rather do that in our tents, so off we went through the rain.  We reached our campsite just as the rain cleared off and the guys hit the river to catch native cutthroat trout while Jack and I prepped for dinner and our day hike the next day.  The guys returned to camp with mixed reviews… nearly everyone had caught fish, but it was slow due to the recent storm activity.  After gorging ourselves on delicious backcountry burritos, we hit the sack eager for what the next day would bring. 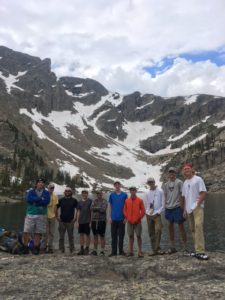 On Saturday we woke up to beautiful clear skies, quickly downed breakfast, and hit the trail in pursuit of high alpine cutthroats.  We made great time climbing up about 1500 vertical feet to one of three lakes we would visit that day.  At this point we split up into two groups and headed to two different glacial carved lakes.  The guys killed it, with many catching double digit numbers of gorgeous cuts, and a few pulling in upwards of 30 trout!  After waiting out an afternoon thunderstorm, we trekked back to camp to feast on backcountry pizzas and enjoy some well deserved sleep. We woke up Sunday morning to another stunner of a Colorado bluebird day.  Again we split into two groups, with one group staying in the valley to fish around camp, and the other group heading off trail to visit one the more remote and least visited parts of RMNP.  The going was tough to say the least… a huge snowstorm in may, followed by an intense wind event felled an unbelievable amount of trees.  It was as if the forest had been carpet bombed.  After an arduous mile of distance and roughly 1000 vertical feet of climbing, we popped out into an amazing hanging valley carved by the last glacial period.  The benefit of visiting fisheries nobody knows about or visits is that the fishing is absolutely unreal.  The guys quickly lost count of how many cutthroats we had landed.  After an amazing day fishing and hiking this alpine wonderland, we retreated back to lower elevations, our tents, and chicken tortellini alfredo. 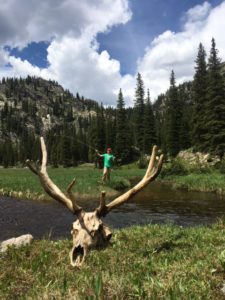 Today we got up, broke camp, and hiked out of the backcountry.  It was quite the trip.  Everybody caught fish, everybody crushed the hiking, and everybody had an awesome time.  After exiting the wilderness, we took some much needed showers, did our laundry, and headed over the world famous trail ridge road to the east side of RMNP for our service project building trails in wild basin in the shadow of Longs Peak.  After our service project it’s back to the west side for our second excursion into the backcountry.  Look for the next update when we exit the woods, and until then… Tight Lines! Charlie Parr