The 2022 Colorado Rocky Mountain expedition just finished up an awesome second backcountry trip into the wilderness of Rocky Mountain National Park! The last time you heard from us we had just finished up our first backcountry and were getting cleaned up and resupplied in preparation for  our second backcountry. The following day we woke up early, packed up camp, and drove to our trailhead. The hike traversed through a beautiful but desolate section of the park that had been completely burned by a forest fire just a few years prior. The campers were feeling reenergized thanks to our showers and pool time from the day before, so we made quick work of the few miles to camp. Since we arrived at camp in the early afternoon, everyone was able to fish the stream for a few hours before dinner; we caught some nice Brown, Brook, Rainbow, and cutthroat trout. 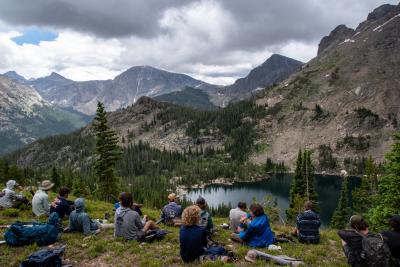 The next day we packed up camp again and hit the trail after a quick breakfast. After a steep initial climb, we made a pitstop for lunch at a scenic stream pool for some lunch, fishing, and swimming before finishing up the hike to our second campsite. The hike was beautiful, as we finished our climb and entered an alpine meadow we were greeted by the sight of two moose bathing in a nearby pond! After we set up camp, the kids did some fishing for the resident cutthroat trout in the stream around camp before we got to bed early to prepare for the next day. 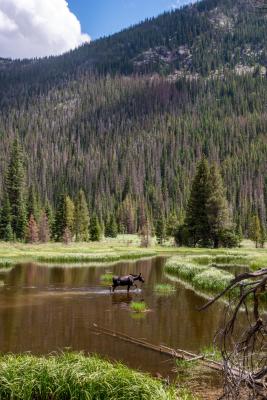 The next morning we woke early and packed our day packs with fishing gear and lunch before starting off toward a long and steep set of uphill switchbacks. By lunchtime, we reached the first lake in a chain of alpine lakes, where we turned off trail. We began a short but brutal hike up a steep mountainside that had everyone’s legs burning by the end. The reward at the top of the saddle was worth it - incredible views of the entire park. We took a short break to soak up the scenery and get some water before we began our descent to the day's target lake. After scrambling down a steep scree field, the group made it to the lake and quickly rigged up rods. Unfortunately, some heavy cloud cover and light rain had moved in and slowed the fishing down. Despite it, we were still able to land a few good sized cutthroat trout in the first few minutes. After a brief rain, the sun came out and the fishing turned on! By the end of the day, every camper caught multiple nice-sized cutthroat trout, with some kids landing as many as 20 fish! Between sight fishing to big fish, the beautiful scenery, and improved weather, it was hard to tear ourselves away from the lake. Eventually, we had to retrace our steps back to camp before it got dark. 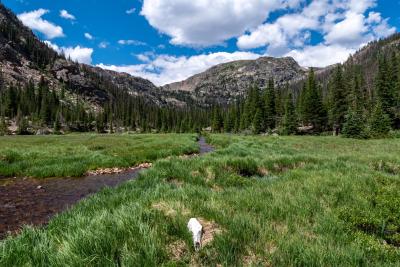 The following morning we had another big day hike planned. The hike was much shorter than the previous day hike, but was also significantly more technical in terms of terrain. This time we began hiking off trail just outside of camp, but had to start vaulting downed trees in the burn area of the forest almost immediately. By the time we made it through the burn area, the terrain shifted into scree fields that we had to scramble up and traverse across. After an hour or so of slow going, we made it to our destination. The campers decided to divide and conquer with some kids fishing the lake, and others continuing upstream to fish either pocket water in a rugged canyon section or slow, meandering pools in a scenic meadow. All groups had success and caught a ton of cutthroat trout over the course of the day. 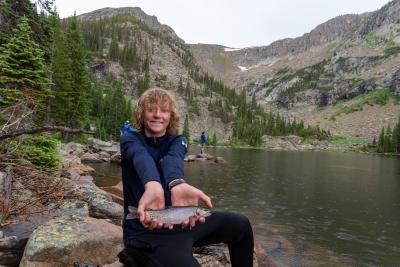 The following morning we packed up camp and hit the trail extra early in order to make it back to the front country in time for lunch. After a stop for ice cream, we headed to our front country camp for showers and laundry. We had a relaxing night around the campfire with a pizza dinner to celebrate our return from the backcountry. Tomorrow will find us heading to our campsite on the Colorado River where, over the course of the next few days, we'll chase trophy trout, do our service project, and float with the help of some local guides. We had a ton of fun on the last backcountry trip and everyone is super excited to fish the Colorado during this next section! 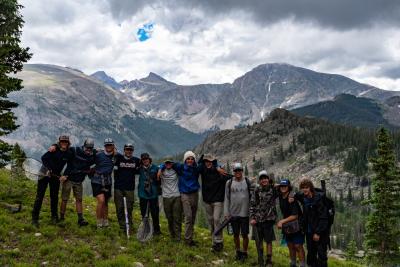