It sure is good to be back to civilization!  We have had quite the week since you last heard from us.  This past Saturday we worked with the Crested Butte Land Trust for our service project.  We spent the morning pulling invasive weed species from the banks of the Slate River just outside the town of Crested Butte.  After breaking for lunch we spent the afternoon demolishing unwanted social trails from the popular hiking/mountain biking/horse riding area known as Snodgrass.  After a hard days work, we retired to town to restock on fishing supplies at a local fly shop, then treated ourselves to some delicious home made ice cream at Third Bowl Ice Cream in town.  To end the day, we spent the evening fishing the Taylor River, enjoyed a Mexican fiesta for dinner, then got some much needed sleep.

Sunday was a travel and down day for the group.  We grabbed donuts in Gunnison then headed over the continental divide to the Arkansas valley to our campsite below the towering Mt. Princeton.  We spent most of the afternoon fishing nearby chalk creek, then prepped for our upcoming 5 day backpacking stint in the collegiate peaks wilderness.

Monday was when the action really began.  We woke up early to meet our horse packers and give them our group gear plus other odds and ends to lighten our packs for the first day of hiking.  Then we headed to our trailhead to begin our hike for the day.  The trail climbed roughly 1,700 vertical feet from the Arkansas valley floor through mixed pine and aspen forests to burst into lush mountain meadows surrounded by some of Colorado’s tallest peaks.  We made our camp for this first night in one of these alpine valleys nestled amongst a gorgeous aspen grove.  After setting up camp we had the rest of the afternoon and evening to relax after the arduous hike and catch plentiful brook and cutthroat trout out of the adjacent stream.  Everyone who fished quickly caught trout, and we were able to cook up some delicious brook trout as an appetizer for the nights meal.

Day two in the backcountry saw us move a further 3 miles and 700 more vertical feet up the trail to the uppermost alpine valley of this particular drainage.  This truly is an alpine wonderland.  Huge alpine peaks surround on all sides while the stream oxbows through the willows and beaver dams of the valley.  Fortunately our early start for the day meant that we had ample time to get up to the true gems of this valley.  At the very head of the valley, high above the tree-line lay several lakes that make a veritable fly fishing paradise.  The first lake we hit is an absolute stunner.  The first cast into the lake produced a 15 inch greenback cutthroat resplendent in spawning colors, and the action continued nonstop for the next several hours.  After countless cutthroats, most in the 15-20 inch range, we made the trek 500 vertical feet higher to the next lake nestled in a tight alpine bowl.  This lake is truly special as it harbors one of the rare Arctic Grayling populations in Colorado.  We spent another couple of hours catching this incredibly rare fish before retreating back to the cutthroat lake.  We were incredibly lucky, as we had barely any cloud cover, and none of the menacing storm clouds so common in the afternoon skies of the rockies.  This let us fish well into the evening and we finally headed back to camp around 6 PM, ate dinner and got to bed early in anticipation of our big day planned for Wednesday.

On Wednesday we got up at 3:30 AM for our big day hiking in the Alpine.  The mission for today was to go off trail and cross the continental divide and scope out two lakes seldom ever visited by anyone and see if they held trout.  Then we would cross back over the divide and finish the day fishing the cutthroat and grayling lakes.  We made great time up into a high alpine basin where we took a break to wait for the sun to rise so we could get a better look at our ascent route.  We climbed the steep scree (loose rocks and boulders) field to top out on an unnamed pass at 13,400 feet to catch the sunrise and a glimpse of our first objective lake.  While descending towards the lake we were lucky enough to spot a herd of mountain goats that contained two baby goats!  Once we reached the first lake, we were surprised to find it teeming with scuds (freshwater shrimp), a delicacy for trout, but unfortunately no fish were found.  We continued up and around a ridge to another cirque containing the second lake we were targeting for the day.  Again our plans of finding monster trout were foiled, but the views were stunning and we took the opportunity to eat lunch and take a quick nap in this pristine mountain setting.  So we shouldered our daypacks and ascended our second high (13,300) pass across the continental divide for the day to drop back down onto our magical cutthroat lake.  At least we knew the fishing there would be ridiculously good, and it was.  After bagging some more trophy fish we headed back to camp to enjoy backcountry thanksgiving for dinner followed up by the all-time favorite dessert; s’mores!

We slept in until 9:00 AM Thursday morning, broke camp, and made one last pilgrimage to the cutthroat lake before moving further down valley toward the trailhead to make our last day of hiking an easy one.  After fishing most of the day, we made camp around 6:30 PM and enjoyed some fresh cooked brook trout before a fabulous fettuccine carbonara dinner.  Then it was out of the backcountry today where we thankfully got to shower and soak in a hot springs in Salida, CO, then do our rather dirty laundry from the backcountry.  Tomorrow we will be float fishing the gold medal waters of the Arkansas river with Ark Anglers in hopes of bagging some trophy browns and rainbows.  After that we will be gearing up to head home on Monday.  Look for the last update on Monday, and until then…

Charlie and the crew 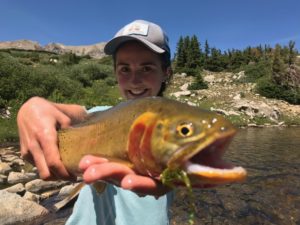 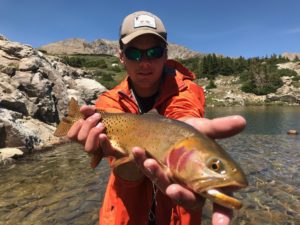 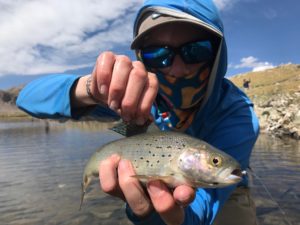 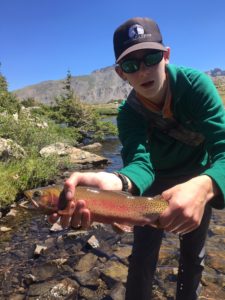 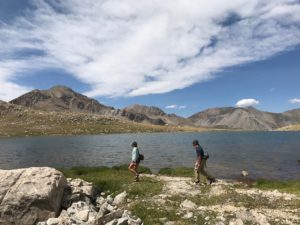 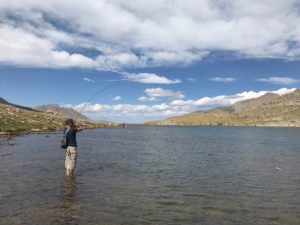 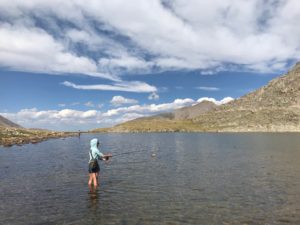 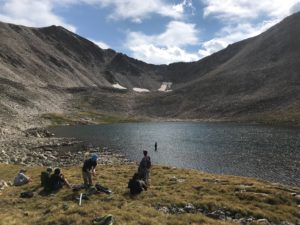 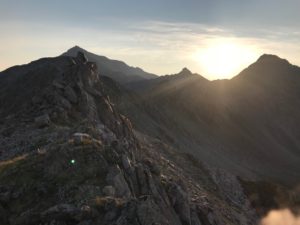 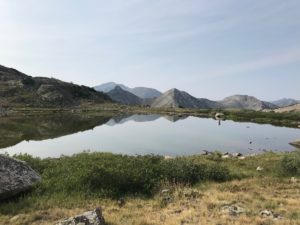 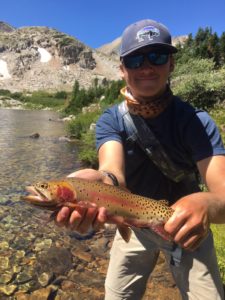 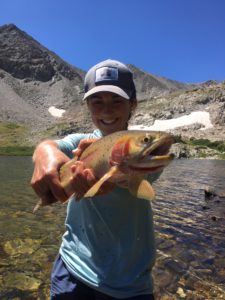 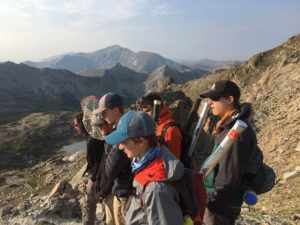 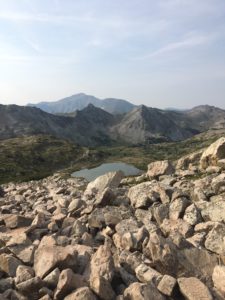 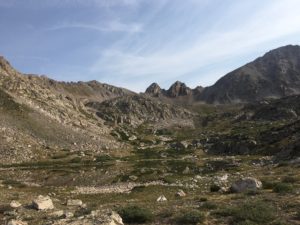 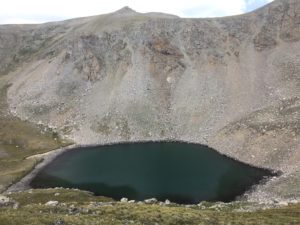 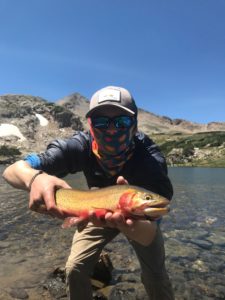 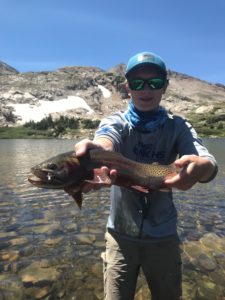 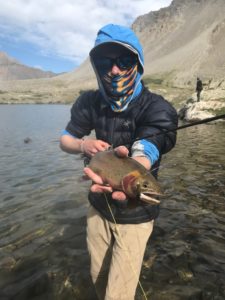 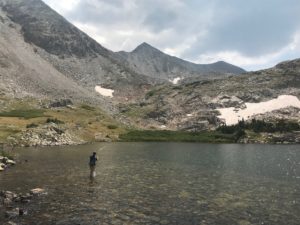 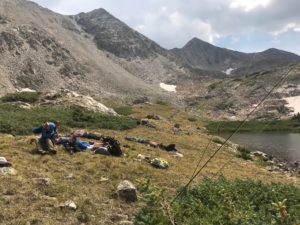 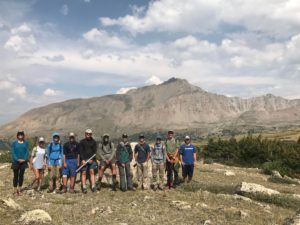 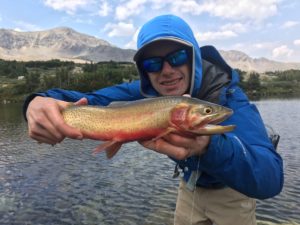 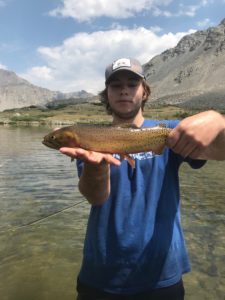