Hunting for Trophies on the Bechler River

Will here with one of the Yellowstone Expedition groups, and after three nights along the Bechler River we are back in civilization. I am happy to report that it was an awesome first trip into the Yellowstone backcountry and that we were able to catch just as many fish as we had originally hoped for. 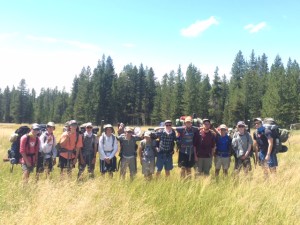 On Tuesday morning we loaded up our backpacks and hit the trail in one of the most remote corners of the park. Our hike brought us along the Bechler River, famous for its large, but difficult to catch, rainbow trout. After roughly three miles of hiking up to the meadow section of the river we set up camp right on the water’s edge. Within an hour we were out on the stream catching fish! 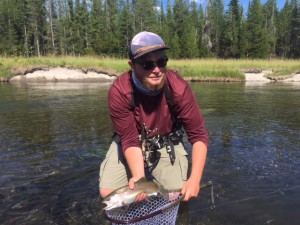 Dayton landed what ended up being the largest fish of the trip within the first 30 minutes on the water." />

Our preliminary attempts were fruitful to say the least, as all members of the group were able to hook into one big fish at least. That afternoon we caught several fish, but unfortunately fell short of reaching our goal of breaking the LFFE record with a wild fish over 23.5 inches.  This, however, still leaves us with a mark to strive for, and at the end of the day 21 inch fish aren’t so bad.

The second day we woke up to heavy cloud cover. Those familiar with western fishing will know that this shift in weather can slow down the fishing, and unfortunately for us, it did. The holes that were full of trout the day before were empty. We managed a few nice fish but not with the consistency that we had the day before. It took all of our skill to sneak up on rising fish and cast to them without spooking them farther into hiding. 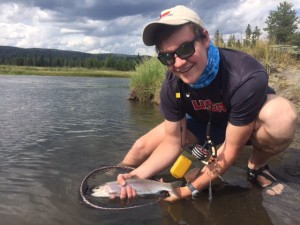 Wiley with a beautiful fish for a cloudy and difficult day." />

Our final full day we woke up to sunshine and a steady breeze, perfect hopper fishing weather. After a quick breakfast we hit the water in search of a new record. I think it is safe to say that more than half of the group had 23″ plus fish on the line, landing them was another story. 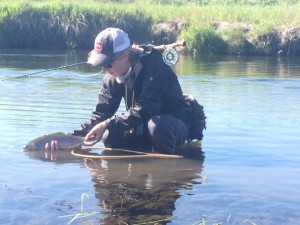 The river was slow moving and full of deep holes, but you could tell it was not these fish’s first rodeo. When hooked the trout quickly dove for any log, grassy patch, or undercut bank that they could find. We all caught lots of fish, including some beautiful 20″plus monsters, but we still fell short of our ambitious goal of 23.5″.

After hiking out of the backcountry this morning we made the drive over to Mammoth Campground. For the next three days we will fish the front country rivers that make Yellowstone famous. Follow us on Facebook or Instagram for more some photo updates. 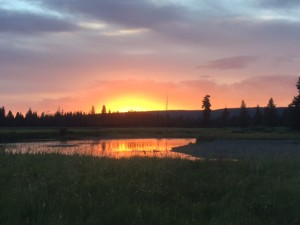