After the incredible fishing we experienced on the Rapid River, the crew headed to Rangeley lakes state park for two nights. Followed by our backcountry expedition in the Moosehead lake region of Northern Maine. 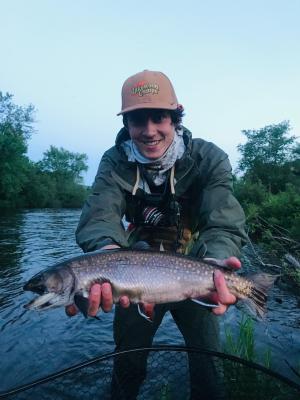 After our boat ride back from Lakewood the kids napped while we drove down remote dirt roads to Rangeley lake state park where we set up camp right on the banks Rangeley lake. Once camp was set up and bellies were full with fettuccine Alfredo, the crew headed out to the Maggalloway river for the evening hatch. It did not disappoint! As soon as the sun fell behind the horizon, clouds of caddis rose from seemingly nowhere. The group was in awe of the sheer number of bugs in the air. We fished until we couldn't see our fly on the water anymore. The water boiled with risers and we hooked up with several massive native brook trout. However, only a few of the hard fighting fish made it all the way to the net. Despite the missed opportunities, the team hoped on the van with high spirits having witnessed a sight many fly fisherman only dream about. On the ride home we witnessed another huge hatch. This one of the mammal variety. We spotted seven moose before they slipped into the darkness of the forest. Back at camp  the kids enjoyed some late night s'mores before being serenaded to bed by loons. 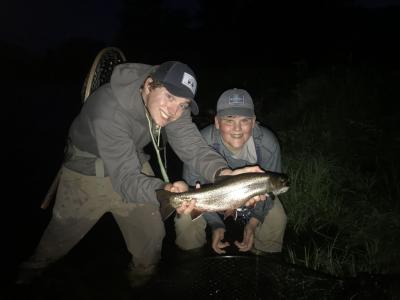 After such an eventful night everyone agreed we should sleep in. The crew enjoyed a relaxing morning by the lake before heading into the town of Rangeley. A stop at the local fly shop was a necessity and we geared up for the night to come with new caddis patterns. Back at camp a handful of kids went for a swim in the lake before the big game. We spent the afternoon playing baseball with a tennis ball and metal rod tube. The close game got cut short as we had to make dinner and hastily get to the river. Stuffed with burritos, we added another moose to our tally as we drove back to the Magalloway for round two. Like clockwork, the sun went down and caddis emerged from everywhere. Geared with special flies from the local shop, kids started hooking up left and right. Before darkness had completely settled we had brought four trophy native brook trout to net. Fish you couldn't find anywhere else in the lower 48. On the ride home we spotted five more moose, no were not exaggerating. Back at camp, we feasted on banana boats cooked over the fire, spirits were high as a kite.

After the unreal fishing on the Magalloway, we trekked up to Greenville Maine and prepared for our backcountry expedition. Everyone got the chance to do laundry, shower, and clean up for our date with the Maine backcountry the following day. We spent the evening on Moosehead lake in Greenville. We ate ice cream and enjoying the luxuries of society before we headed into the woods the next day. 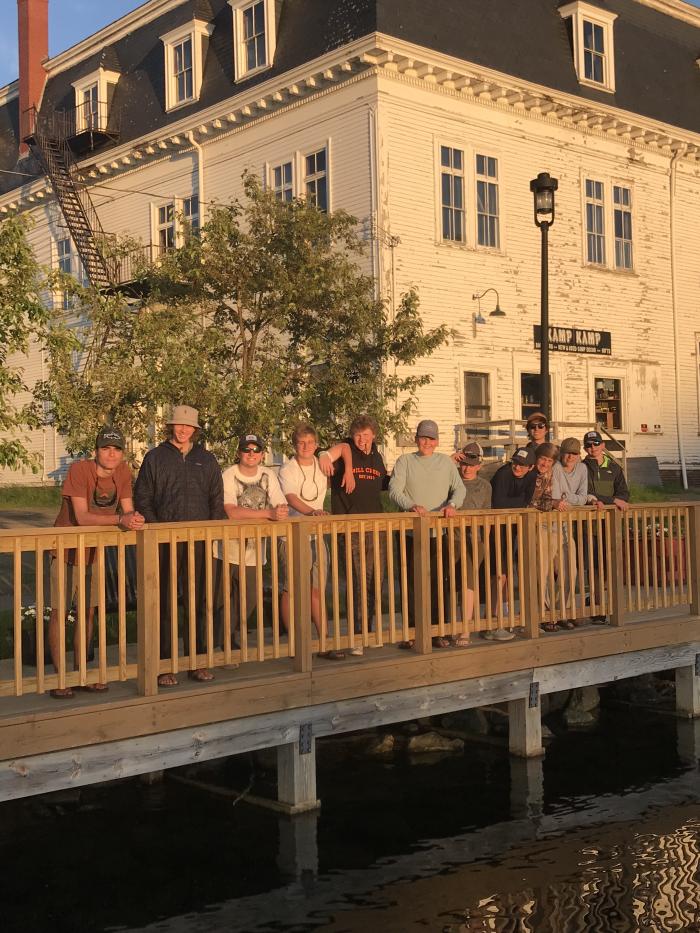 The next morning we woke up bright and early and spent the morning fishing the legendary East outlet of the Kennebec river. The team spotted some massive landlocked salmon. However, we were only able to fool the less wily, smaller fish. After fishing all morning, we made our way to Indian pond. Where we packed our gear into dry bags and set out in canoes. The group got their first taste of paddling as we crossed the pond to our campsite at the inlet of the Kennebec river. We hastily set up tents and cooked dinner as a storm loomed over top of us. Those who decided to brave the weather and fish the evening hatch were rewarded with nonstop action on dry flies. Others sheltered from the rain beneath the trees, next to a warm fire. Despite the poor weather, spirits remained high as everyone knew what awaited them the following day. 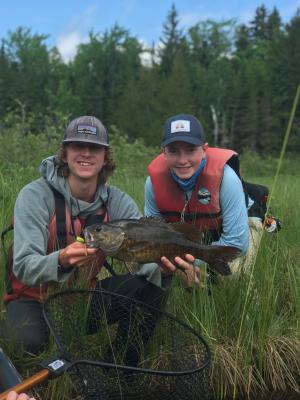 We opened our tent flies to a clearing sky. With the bad weather behind us, we quickly packed up our fishing gear, ate a hot breakfast, and headed to the west outlet of the Kennebec. Once at the river, Robbie, who had already floated the river twice with the other group, briefed us on what to expect on our float. It didn't take long to start hooking up with large smallmouth bass. Much of our action was on poppers, which added to the excitement. The fishing was only half the fun. Everyone had a blast navigating their way through the small sections of rapids the west outlet provided. For lunch, we rafted all our boats together and enjoyed food while we talked about the morning. The fish catching slowed as the clouds completely cleared into sunny skies, but didn’t cease after lunch with some more smallmouth being brought to hand. Some of the crew even decided to cool off by swimming in the crystal clear water of the Kennebec. The day was capped off with several loon sightings and a big fire with s'mores. We all slept well that night. 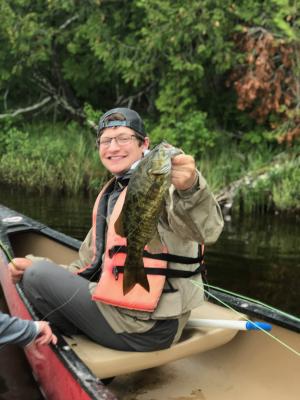 This morning we paddled back to society and the comforts of our van. The crew is currently making it's way from Northern Maine to Massachusetts. Over the next few days we will be chasing elusive pike on the Housatonic. Everyone is looking forward to more time on the water and the chance at a forty inch fish. 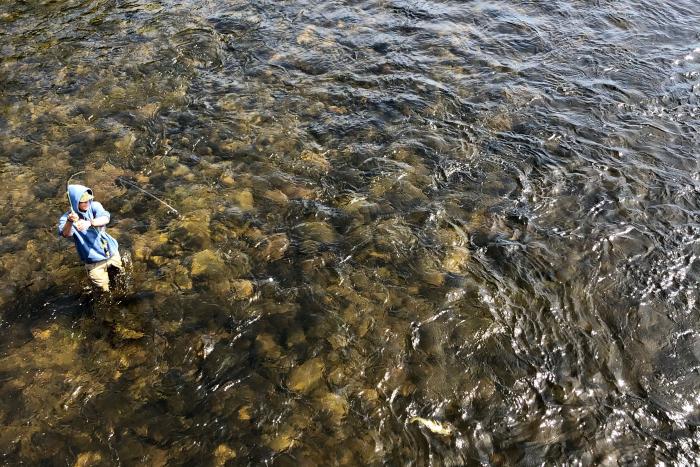 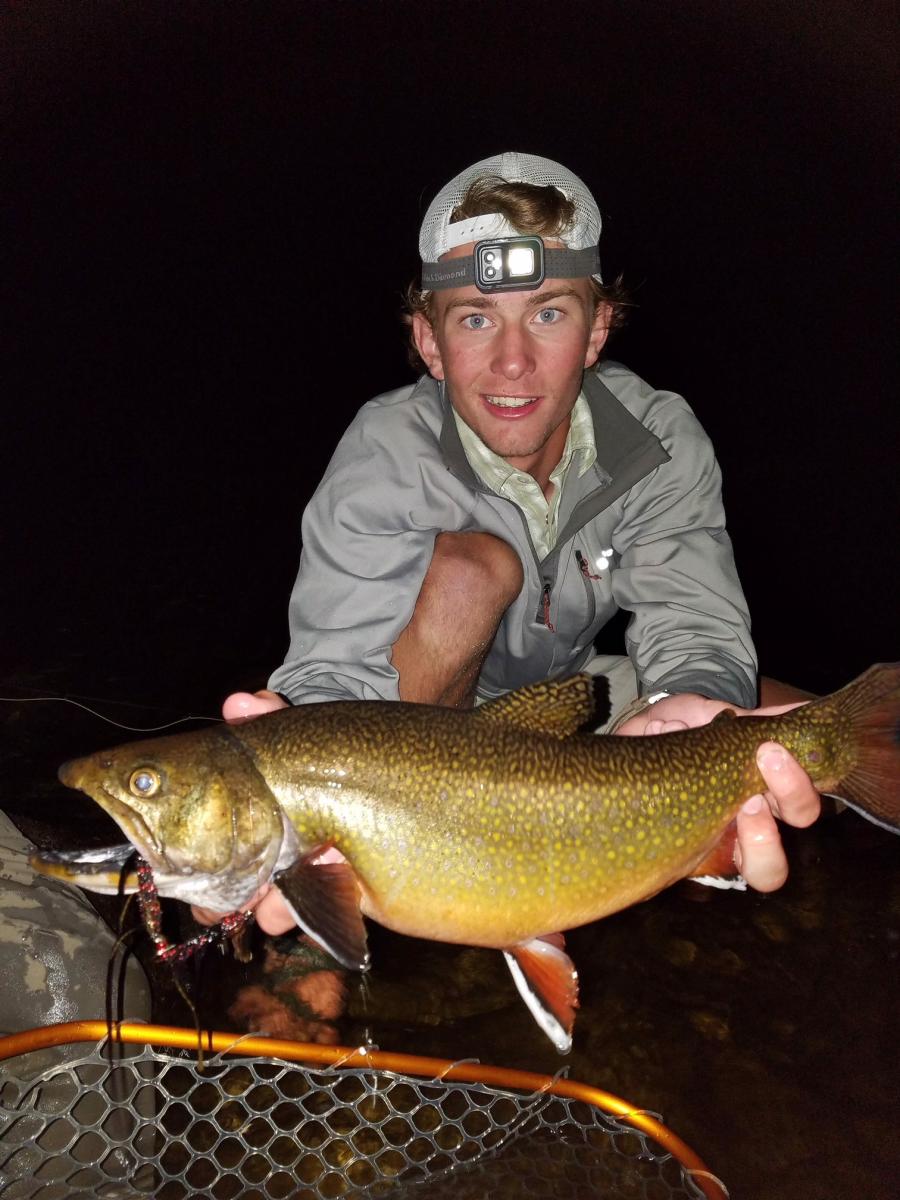