Pisgah National Forest is one of the few temperate rainforests in the lower 48, so when the forecast calls for two days of strait sunshine you better be ready to take advantage. Our original plan was to enter the backcountry on 6/8, but instead we packed up camp and went searching the backcountry of Pisgah National Forest in search of native southern brook trout on 6/7.

NC is home to a lot of well stocked public and private trout streams. Many of these even have reproducing populations of wild trout, with some “trophy” trout well over the 20 inch mark. But high in the mountains, in small streams full of only the coldest and cleanest water lie North Carolina’s true trophy trout. The native Southern Appalachian trout do not grow very big (a 14 inch fish is a rare occurrence) but what they lack in size they make up for with spectacular colors and a willingness to aggressively attack dry flies. 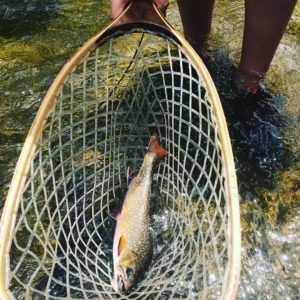 Our group took advantage of two days of blue sky to hike miles into the backcountry to rarely fished creeks in search of some of these native gems, and our effort was rewarded with many trout that eagerly ate our flies. Everyone in the group reached double digits of brookies before we hiked out for some showers and laundry.

The trip is flying by, but we are all excited to spend the last few days fishing some front country streams,  doing a service project to help clean campgrounds along a small brook trout stream, and spending a day chasing some monster trout on the Davidson River private water. We will post another update at the end of our trip. Until then…