For the last 4 days we have been exploring the rarely visited remote northwest corner of Rocky Mountain National Park.  Tucked in between the Mummy Range and the Never Summer range, this part of the park sees almost no visitors, which makes it perfect for viewing wildlife and especially good for fly fishing.  We arrived in this pristine part of the park on Wednesday and quickly set about fishing.  Despite the guys having relatively little fly fishing experience, they were catching trout right out of the gate.  We spent several hours reeling in eager brook trout and native greenback cutthroat trout, but the weather turned on us and forced us back to camp.  We turned this predicament into an opportunity to go visit nearby Joe Wright reservoir, which is known for its population of Arctic grayling.  These fish can be difficult to catch due to their tiny mouths, but the guys managed to do just fine, nabbing several grayling. 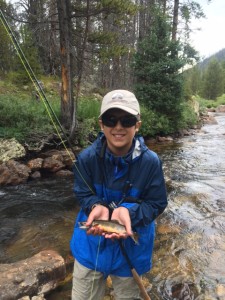 The next day we put on our packs and hiked into the wilderness.  After reaching our campsite and setting up, we had an entire day of fishing before us.  We had three excellent creeks and streams to choose from , and none of them disappointed.  We spent most of the morning and all afternoon and evening fishing.  Everyone on the trip had caught dozens of trout by dinner time.  After a hearty meal we hit the hay early in anticipation of our hike to a high alpine lake the next day. 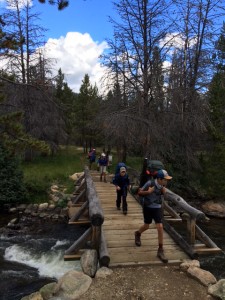 We woke up and downed a hearty breakfast, then began the roughly 4 Mike hike up to our destination.  The guys crushed the hike and we were rewarded with absolutely stunning views over the lake and even better fishing.  I think a fish was caught on the very first cast!  Fortunately the typical August weather held off and we got no rain, allowing us to fish well into the evening.  By the time we departed the lake, we had netted well over 200 fish as a group.  The hike down went by fast and we were able to get a few more fish before our delicious dinner of backcountry pizzas.  After dinner we managed to keep our eyes open just long enough to catch some of the ongoing meteor shower.  All in all an epic day. Today we hiked out of the backcountry, resupplied in town, did laundry, and took some much needed showers.  Tomorrow we will be doing our service project with RMNP, after which we will head to the Arkansas River for our float trip with ark anglers.  Look out for our next update after the float trip, and until then… Tight lines! 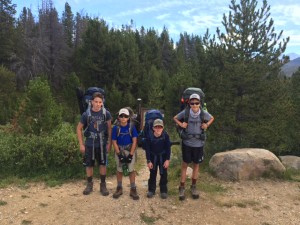