What a trip!  The last four days here in Rocky Mountain National Park have been absolutely amazing.  Our first excursion into the backcountry saw us hike along the north boundary of RMNP all the way up to what is known as lost Lake.  Due to the very wet spring we have had here in Colorado, the original trail we were supposed to hike was washed out and impassable.  This forced us to hike a more difficult and longer trail on our first day, but the guys absolutely crushed it!  Our first day was admittedly rough, even for a seasoned backpacker like myself, and we didn’t reach camp until seven in the evening.  Some of the guys managed to pull a couple brook trout out of the North Fork of the Big Thompson before we gorged on chili mac and hit the hay.

We packed up camp after sleeping in and made the short hike to our next campsite just below Lost Lake.  After lunch we walked up to Lost Lake and were rewarded with spectacular views and even better fishing!  In no time at all, the shout “fish on!” could be heard all around the lake.  By the time we hiked back to camp everybody had landed multiple greenback cutthroats, and even a few brook trout in the 14” range!

On our third day in the backcountry, we decided to hike just a bit higher into the high alpine to explore a few more lakes in the valley.  Our first stop was Lake Husted, and while the fish were not as plentiful as Lost Lake, they were certainly bigger.  At this point we split into two groups, one group went back to Lost Lake to keep fishing hard, and the other group opted to hike even higher in search of alpine vistas and more fish.  We hiked to the next lake, Lake Louise, and despite the ferocious wind, we managed to hook some more cutthroat.  With one more seemingly fishable lake just a short hike away, we couldn’t resist, so onward and upward to Lake Dunraven we went.  Unfortunately it seems that Lake Dunraven is a dead lake (no fish), but the views and the pure exhilaration from being at 11,500’ more than made up for the lack of fish.  With the day winding down it was time to head back to camp and gorge on backcountry burritos in preparation for our hike out.

With the guys now being acclimated, and the elation of catching so many wild, native, and threatened greenback cutthroats, the hike out was much easier than the hike i 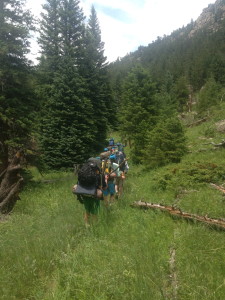 n!  Now its just time to recuperate, do laundry, resupply, and prepare for our service project tomorrow.  I know that we are all looking forward to our next stint in the backcountry as well.  Keep looking for that next update, and don’t worry about us!  We will be catching trout and living the good life here in Rocky Mountain National Park.