We hiked out of the backcountry this morning, and boy was this last backcountry an epic one.  Over the past four days it’s safe to say that the group, as a whole, netted several hundred fish! 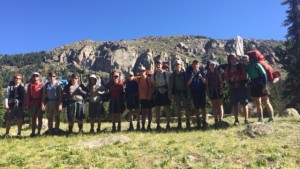 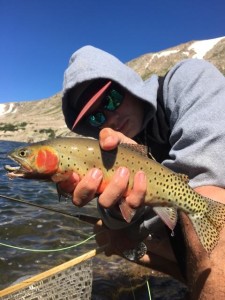 We were a bit delayed starting our hike due to the ongoing road repairs from the 2013 Big Thompson River flood.  But we eventually got to the trailhead and started out with a solid 6 mile uphill hike to our first campsite, which was nestled among an aspen grove and a small meadow.  The stream running next to camp harbored many small brook trout, who were eager to eat just about everything we threw at them.  While some were fishing, others chose to swim in the stream, or just simply relax in the warm afternoon sun and take in the views.  That evening we settled down and enjoyed a veritable backcountry feast of chicken stir fry before going to bed in eager anticipation of our next day. 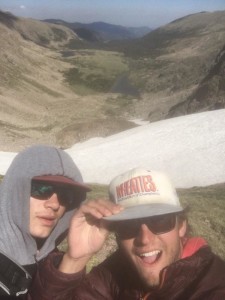 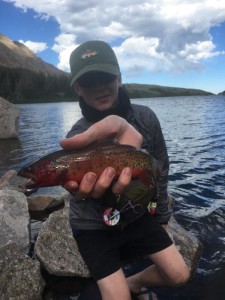 After eating a quick breakfast and breaking camp, we set out on the short, but steep 2 mile hike to our next campsite.  Once there we quickly set up camp so we could walk unencumbered just a bit further to the first of 3 lakes which were our fishing objectives.  Once we reached the first lake, it was not long before the cries of “fish on” began ringing out around the lake.  Many brook trout and greenback cutthroat were caught throughout the course of the day.  Some of the group decided to head up to the higher second lake to try their luck and were rewarded with some of the largest trout of the trip.  Though the cutthroats in the second lake were much larger, they were equally more difficult to entice to eat our flies.  Once evening came, it was back to the first lake where the fish rising to the surface made the lake appear to be boiling.  Needless to say, this makes for excellent fishing, and we certainly took advantage of this.  Darkness finally chased us away from the lake towards a hot dinner and our warm sleeping bags.  We turned in eager for what the next full day of fishing would bring. 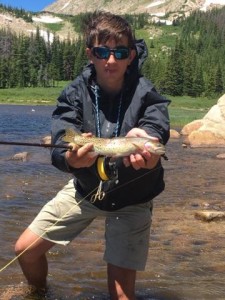 Morning came early as some of the group elected to get up at 5:30 a.m. In order to summit a nearby peak and beat the midday winds which can make casting nearly impossible.  We scrambled up a steep ridge and made it to the summit of a nearby peak, all before most people have even gotten to work.  The views were awesome!  To our north we could see the Medicine Bow range of the Wyoming Rockies, to our east it seemed we could see Nebraska, Kansas, and the plains of eastern Colorado, and to our south lay some of the higher peaks of RMNP.  We scrambled back down to the base of the ridge and the third lake and encountered perhaps the best fishing of the trip.  The lake was choked full of 14″ greenbacks in the full brilliance of their spawning colors, and we were catching fish with nearly every single cast.  It was truly epic fishing.  From there the group split up to explore all three lakes and the connecting streams and ponds, catching prodigious amounts of fish the whole way.  But all good things must come to an end, and darkness descended accompanied by swarms of mosquitos, so we headed back to camp and our dinner of backcountry burritos.

Today we hiked out of the backcountry in near record time, averaging about 3 miles an hour!  Now we get to enjoy showers, clean clothes after laundry, and the comforts of the front country.  Tomorrow we will prepare for our overnight float trip on Colorado River by wade fishing the Colorado to get used to the intricacies of fishing big water.  After our float trip, it’s our final banquet, then we catch planes to head home all over the country.  Look for the final update from Denver on the 19th.  And until then… 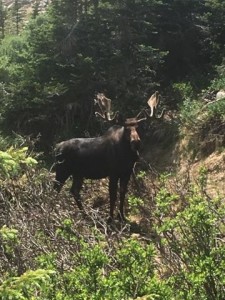