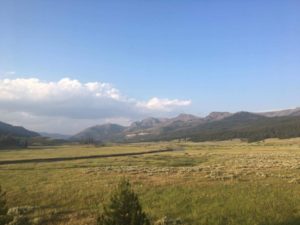 Greetings from back in the front country of Yellowstone National Park. The last for days have been full of adventure and excitement. The group split into two groups with each group spending two nights in the Slough Creek backcountry while the other group stayed and fished from the Slough Creek front country.

The first group hiked the 5 miles to the second meadow of the world famous fishery on 7/18. This is typically prime time for dry flies and hoppers with big cutthroat lazily slipping in slow moving crystal clear bends. With this years record breaking snowfall the river was still moving fast and slightly green, but that did not stop our group from catching some of the big fish Slough is known for.

During their second day in the backcountry  the group really started to figure out how to catch big fish in fast water. With their focus switched to streamer fishing deep holes they more than doubled their fish count from the precious day. All though the fishing was not the as fast paced as it can be on Slough, the kids had a blast catching  the biggest fish of the trip thus far.

Meanwhile the other half of the group enjoyed some solid fishing mixed with some unforgettable wildlife encounters in the front country.  Within the first few hours of fishing the front country of Slough they had an encounter with a Grizzly bear who was passing through. Shortly there after they were catching big fish, also on streamers. 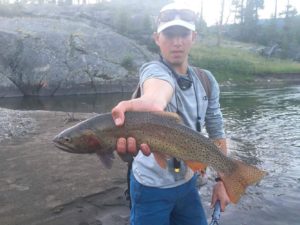 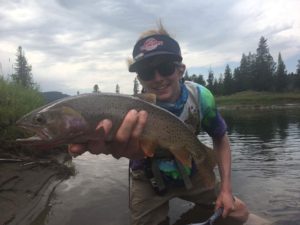 On the 20th the groups passed each other on the trail. With the help of the scouting report from the first crew, the second group in the backcountry for right to the streamer fishing and quickly started catching big fish. While back in the front country the other group made the short drive to Lava creek to fish for some eager brook trout. The mission was a definite success as everyone in the group caught over ten brook trout. This morning when the second group exited the backcountry we made our way back to Mammoth Campground before heading into Gardner Montana for some showers, laundry,  and mouth watering burgers at a local favorite. We will be hanging here for two days before heading to the Madison River and ultimately the Bechler River backcountry. We will send out another update before we head back out of service. 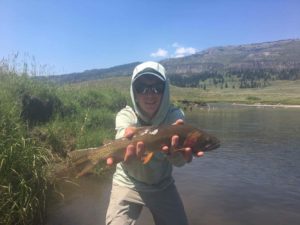 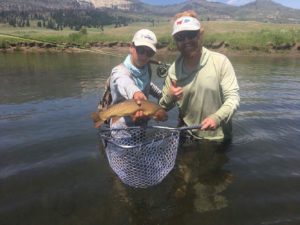