We're back! After seven days, the Thorofare Expedition has made it out of the backcountry! The group caught around 150 fish and hiked over 50 miles! We are pretty tired and sore, but our memories of this fantastic backcountry still have us all smiling and laughing. Almost all of the campers caught their largest Cutthroat trout, and some even landed their largest trout on this trip. 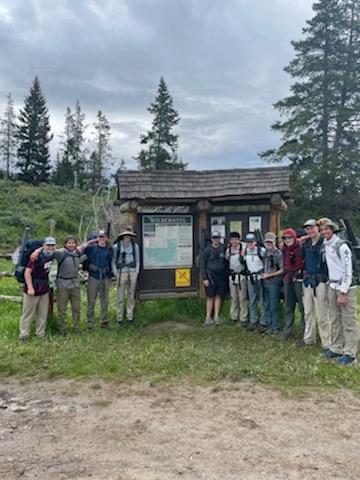 The night before we hiked into the Thorofare, we stayed at a campground right at the trailhead for the backcountry. Our dinner before the hike was a delicious stir-fry, which provided us with the much-needed carbs we needed for our 16-mile hike the following day. We woke up early on Friday and met the horse-packers at the trailhead. We put all our food and other gear on the horses, which made our backpacks much lighter for the big day ahead. The first day of hiking brought us to Two Oceans Pass. The pass is most notable for being where Two Oceans Creek splits and creates Pacific Creek, which drains into the Snake River and eventually the Pacific Ocean, and Atlantic Creek, which drains into the Yellowstone River and ends up in the Gulf of Mexico. We arrived at our camp near the split on Atlantic Creek and ate a quick dinner. Then, from our campsite overlooking a pool on Atlantic Creek, we ate and watched Yellowstone Cutthroat swim upstream. We took a minute to reflect on how amazing it is that these fish swim from Yellowstone Lake to this tiny headwater stream no more than a mile or two from the continental divide, but It wasn't long before the group was recharged and out fishing. The fishing was tough, but the kids got their first glimpse of how beautiful these Yellowstone Cutthroat Trout are.

On day 2, we moved down Atlantic Creek to a campsite near its confluence with the Yellowstone River. We set up camp for three nights in one of the most beautiful spots we had ever seen. To the south, the small historic log ranger cabin sits below the towering cliff face of Hawks Rest Mountain. To the north, the Yellowstone meandered into the horizon. The ranger cabin was next to a natural spring providing our drinking water. Access to the Yellowstone, Atlantic, and Thorofare makes it hard to imagine a better campsite. We caught a few fish on the Yellowstone in front of the camp, but the action began the following day.
On Day 3, the group split up. Half went to the Thorofare Creek, and the other half went up and fished the Atlantic above the confluence with the Yellowstone. Both groups caught tons of fish and came back to camp very happy. We decided that for the following day, both groups were going to head to Thorofare Creek since it appeared to have the most fish and least amount of pressure. Day 4 was even more incredible; half of the group went as far up Thorofare Creek as they could, and the other half fished closer to camp. Both groups caught between 30-40 fish in just one day, which is incredible for this fishery. It's safe to say it was a day of fishing none of us will ever forget.
The following day we began our 20+ mile return to the trailhead. We camped near the top of Two Oceans Pass, and despite tired legs and swarming mosquitos, the group persisted and managed to pull out a few fish. The next day we hiked around 10 miles to the Soda Fork's confluence with the Buffalo's North Fork. This section of river is considered the Headwaters of the Snake River, which is home to the finely-spotted Snake River Cutthroat. It was cool to see how the two different species of native cutthroat evolved on either side of the continental divide. Then, as we watched the sunset in the backcountry one last time, two Moose came down to the river to feed. It was a perfect ending to a perfect trip. 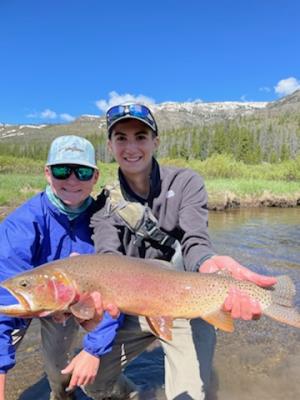 Last night was the coldest one yet, and we woke up to a layer of frost, and warm showers never sounded so good. We made a fire, cooked breakfast, and hit the trail as fast as we could. Our conditioned hikers cruised down the trail and were back to our van by noon. We made it to Jackson for showers and swimming, and we are just about ready to devour some pizza. After that, the plan is to stop in Victor, ID, for some world-famous huckleberry milkshakes at the Victor Emporium before heading back to Ennis, MT, to camp at the LFFE headquarters. Tomorrow we will float the Madison with local guides, feast at our final dinner in Bozeman, and soak our tired legs in the Bozeman Hotsprings. We will be camped at the Bozeman Hot Springs tomorrow night before everyone flies out on Saturday. This has been an exceptional group with a consistently positive attitude, and it has been our pleasure to be a part of it. 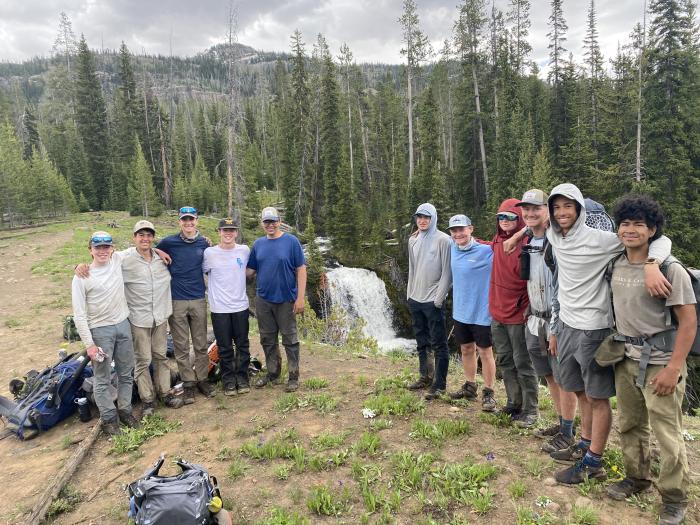 Jack, Will, Henry, and Cole