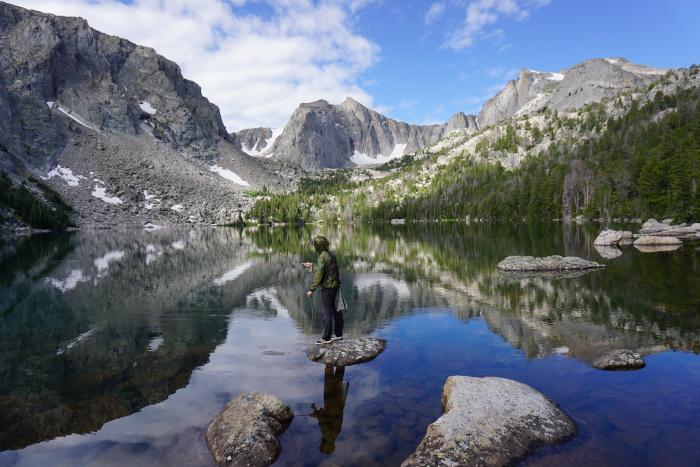 This past summer, Lillard Fly Fishing Expeditions, led a group of returning students on a six day backpacking trip into The Winds in search of the ever elusive Golden Trout. For those not in the know, The Wind River Range, or “The Winds” as they are called, are one of the most amazing wild places in the lower 48 states.  The range spans over 100 miles running roughly from Jackson, WY at its northwest edge, to Atlantic City, WY at its south eastern terminus.  The Winds have 40 peaks in excess of 13,000 feet, 19 of Wyoming’s 20 highest summits, over 1000 lakes, many glaciers, and are the headwaters of three of Wyoming’s major rivers, the Green, Sweetwater, and the Big Horn/Wind River.  This unique mountain range encompasses three wilderness areas across two national forests, and is an integral part of the Greater Yellowstone Ecosystem.  One of the more fascinating aspects of The Winds is that aside from the Green River drainage, trout are not native to its lakes, streams, and rivers.  Over the past century, a hodgepodge of private and public stocking operations has created an incredibly diverse and prolific trout fishery.  One can find brook trout, browns, rainbows, golden trout, grayling, lake trout, and a number of different cutthroat trout species, while angling in the Winds.  With soaring sculpted granite peaks, high alpine lakes filled with hungry and exotic trout, and awe inspiring scenic valleys, it’s no wonder why the Wind River Range tops many outdoor enthusiasts bucket lists! 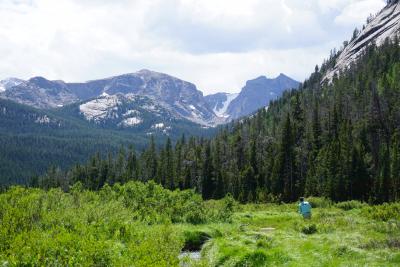 Our first day started before sunrise as we had to make the long drive to meet our pack horses near our trailhead not too far from the middle of nowhere.  Once we had the animals packed up with as much weight as they could manage, we made our way to the trailhead and got after it.  Our first day we had roughly 11 miles to cover, but planned to break after lunch and fish the stream running along the trail.  After three or so miles, we crested a hill and caught our first views of the granite spires and faces that make The Winds a popular climbing destination.  The views were amazing, and spirits were high.  From this point the trail would be flat for 5 or six miles and would provide easy walking, so we trucked through to a suitable lunch spot where we could split up and fish the valley for a few hours.  I believe just about everyone caught a fish on their first cast. The stream was choked full of small to medium sized brook trout, with a few larger cutthroat mixed I as well.  Surprisingly, one of the guys managed to land an arctic grayling too!  We put the rods away, saddled our packs, and got back on the trail.  We still had several more miles to go, plus a daunting 800 vertical foot incline straight up to our pre-arranged drop point for our gear.  The guys did an excellent job, reaching camp well before nightfall, still with time to catch a few more decent sized brook trout out of the two nearby lakes. 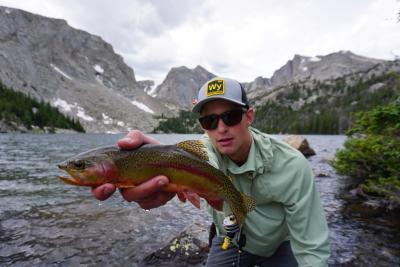 The plan for days two, three, and four was to hike off-trail to a set of lakes rumored to hold one or more populations of Golden Trout.  We had breakfast, broke camp, stashed our gear that would not be coming with us, and headed off into the thick timber of the Wind River backcountry.  Our hike was only 4-5 miles, but through uneven terrain and thick timber, the going was a bit slower than normal.  About lunchtime, we arrived at the first of three lakes set in a steep cirque ringed by thousand foot granite walls.  The setting was spectacular.  After enjoying a hearty lunch and setting up camp, the guys set about fishing.  In no time at all the call of “fish on” was ringing across the lake.  The trout ended up not being a pure golden, but a golden trout/rainbow trout hybrid.  Nonetheless, it was a stunning fish, and judging by how many we caught, we assumed we must have hit the lakes right after ice off.  After a full afternoon and evening of fishing, we were all pretty much asleep by sunset, excited to catch more of these amazing fish the next day.  Upon waking, and eating, we split into two groups.  One group stayed at the first lake, while the second group headed further up the cirque to investigate the other two lakes.  The hike was awesome, the views got better the higher we pushed, and it was thrilling to be in such a remote and wild place.  Unfortunately for us, both lakes ended up being devoid of fish, but the hike, views, and experience were well worth it.  We returned to the first lake and fished until nightfall, catching an absolutely epic hatch right at sunset.  It seemed as if the whole lake was boiling so many fish were hitting the surface!  Such a great way to end an awesome day, the last at what we had dubbed “mudblood lake”, for tomorrow we were going back to our first campsite and continuing our search for golden trout. 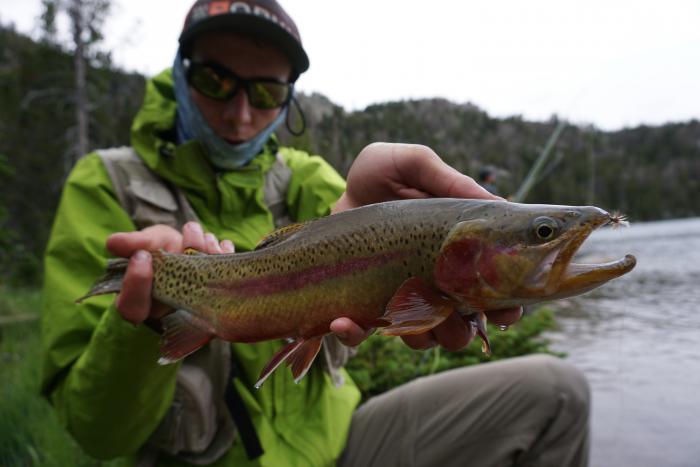 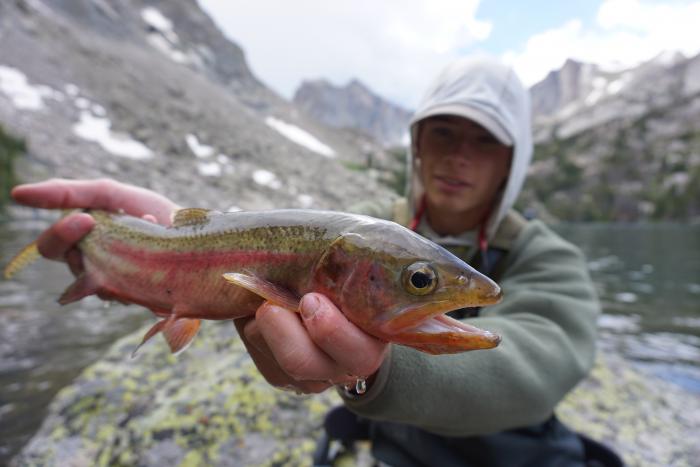 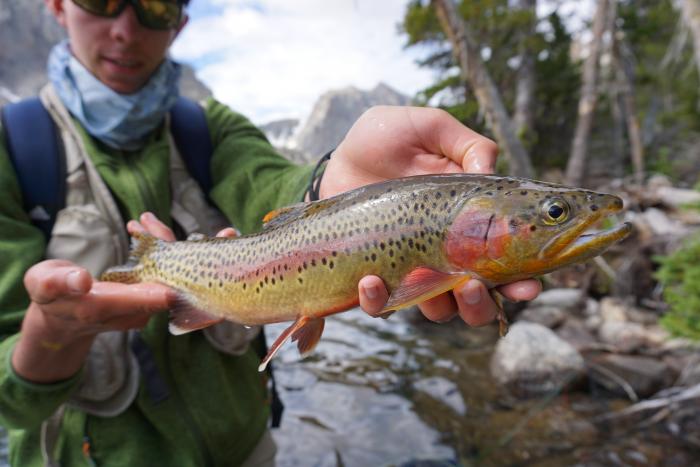 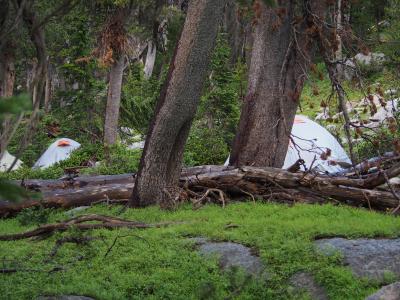 After a nice leisurely morning where some of us fished, others slept in, and still others lounged around, we ate lunch, packed up, and hit the “trail” (we were off trail, but hey).  We made great time going back to our original campsite and quickly set up camp and divided into two groups again.  The first group elected to stay at the four lakes in the vicinity of the camp and rip brook trout all afternoon while the other group decided to hike to the next set of lakes about a mile and 600 vertical feet away to see what they could find. What they found was two lakes brimming with 15”-20” cutthroats eager to eat just about anything.  There were points where we were cycling out anglers every single cast at a specific spot because we were catching fist every single cast.  We quickly lost count of the number of fish we caught and were finally able to tear ourselves away from the fishing in order to make it back to camp before dark.  After another quality day in the backcountry, we ate dinner, and passed out under the brilliant stars. 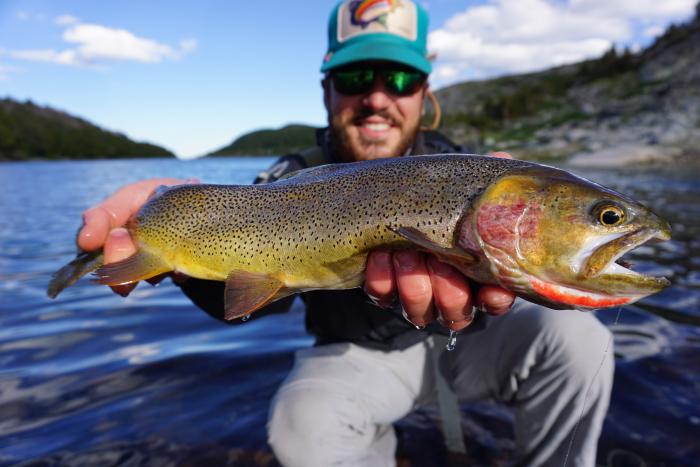 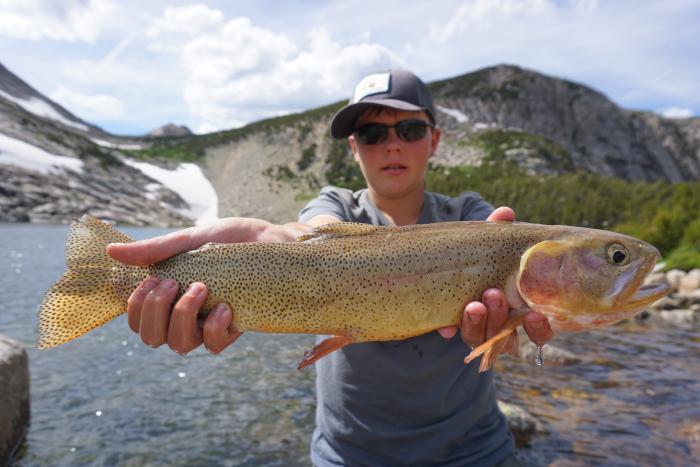 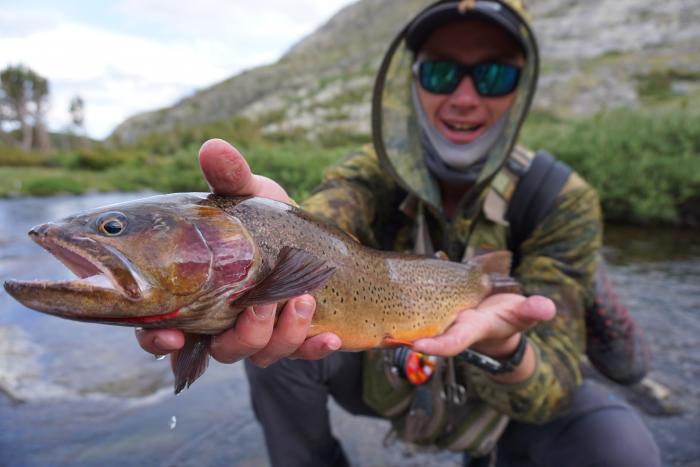 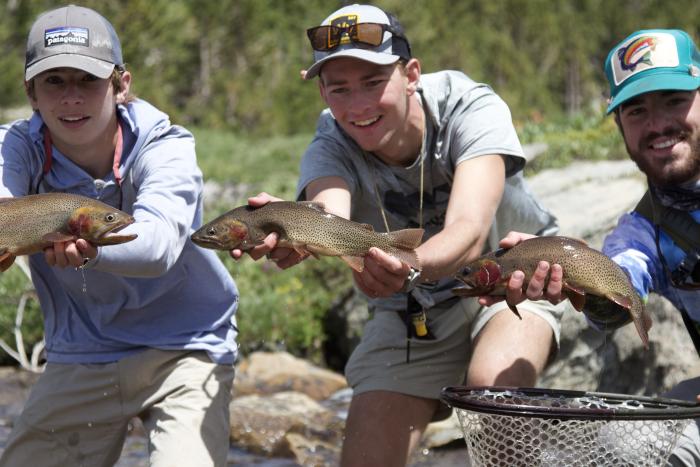 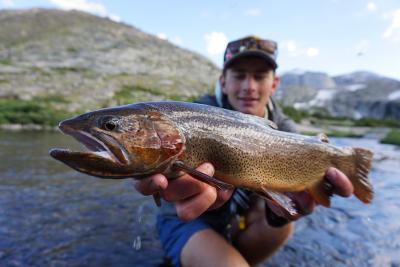 Our fifth day was our final chance to find and catch some pure Goldens and we were not going to let the opportunity pass us by.  We got a decently early start, wolfed down food, then got on the trail.  We reached the cutthroat lakes from the previous day in no time, then planned out our route up to the next cirque containing two lakes we hoped would harbor some hungry Golden Trout.  After 45 minutes or so of scrambling up a waterfall/boulder field, we reached our destination lake, and were elated to see fish feeding in the outlet stream.  We rigged up our rods, spread out to several different locations, then began fishing.  It wasn’t long before our guys proved their worth as fly anglers, everybody in the group managed to land one or more of these beautiful trout.  Nothing is more rewarding than finally nailing your target species after an epic five days spent searching and fishing remote mountain valleys!  After taking some celebratory photos, we descended back to the cutthroat lakes and proceeded to catch trophy fish all afternoon and well into the evening.  A full day of hiking and chasing trout sure does make one tired, so we packed up, headed back to our campsite, and gorged ourselves on a backcountry thanksgiving meal to celebrate on check of a week in the Wyoming backcountry.  The next morning saw us journey back to civilization, take showers, eat food we didn’t cook ourselves, and enjoy all of the other luxuries associated with the frontcountry. 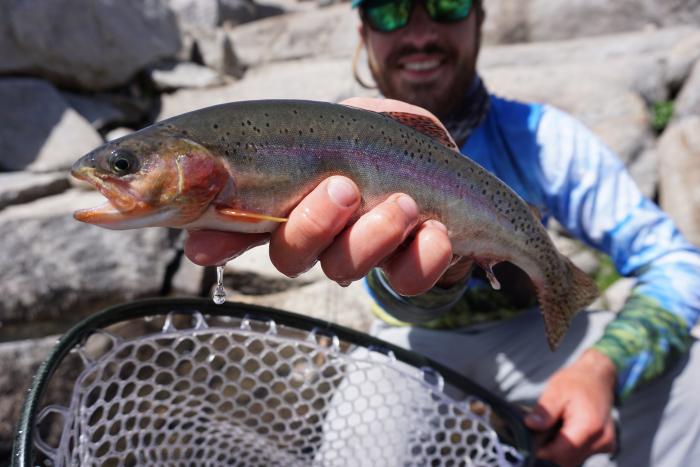 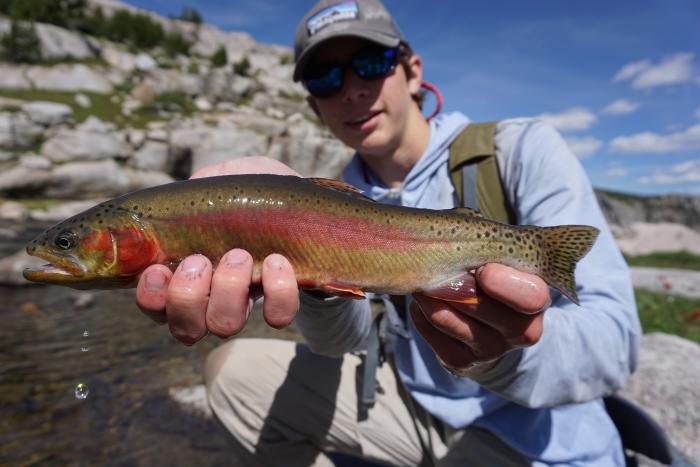 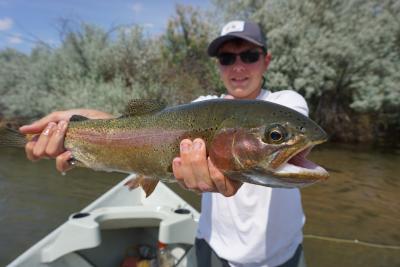 Our trip wasn’t quite over when we left the wilderness of the rugged Wind River Range, we still had our float fishing day, and what a surprise that turned out to be.  We were set to float the Wind/Bighorn River which drains the entire northeastern flank of The Winds, and we really had no idea what to expect.  We met our guides early, got the boats and rods squared away, then hit the river for a full day of float fishing.  The action started off right away with several boats pulling in several 20” or bigger cutthroats and rainbows, and just kept coming all day!  We didn’t put insane numbers of fish in the boat, but all of the fish we boated were big, powerful, and very pretty.  I could see the river being challenging for the novice angler, but for our experienced students, the fish didn’t stand a chance!  I wouldn’t be surprised if a few PB trout were caught that day on the Big Horn. 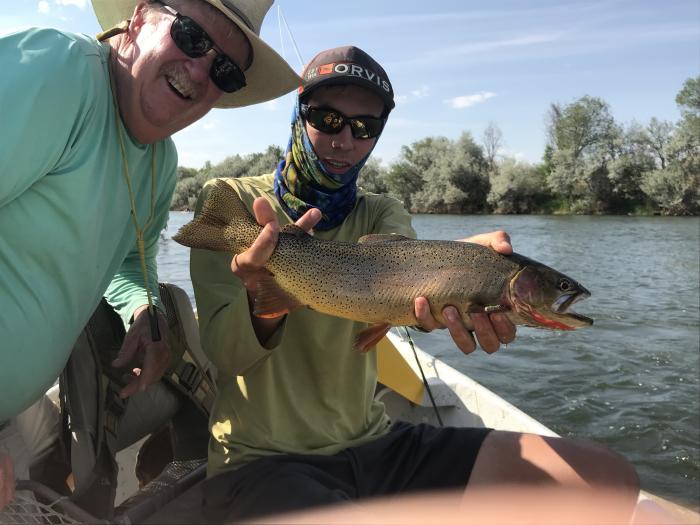 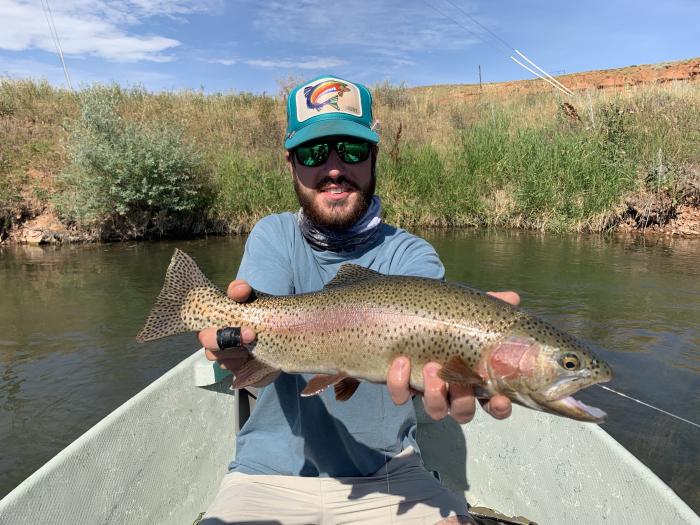 Overall, our trip into the Winds was an experience none of us will forget for our lifetimes.  The views, the fish, the unspoiled wilderness.  It all adds up to a truly unique experience that can be found nowhere else in the world.  It would be an understatement of gigantic proportions to say that we are eagerly looking forward to next summer’s adventure into the wilderness of  The Wind River Range in pursuit of more Golden Trout. 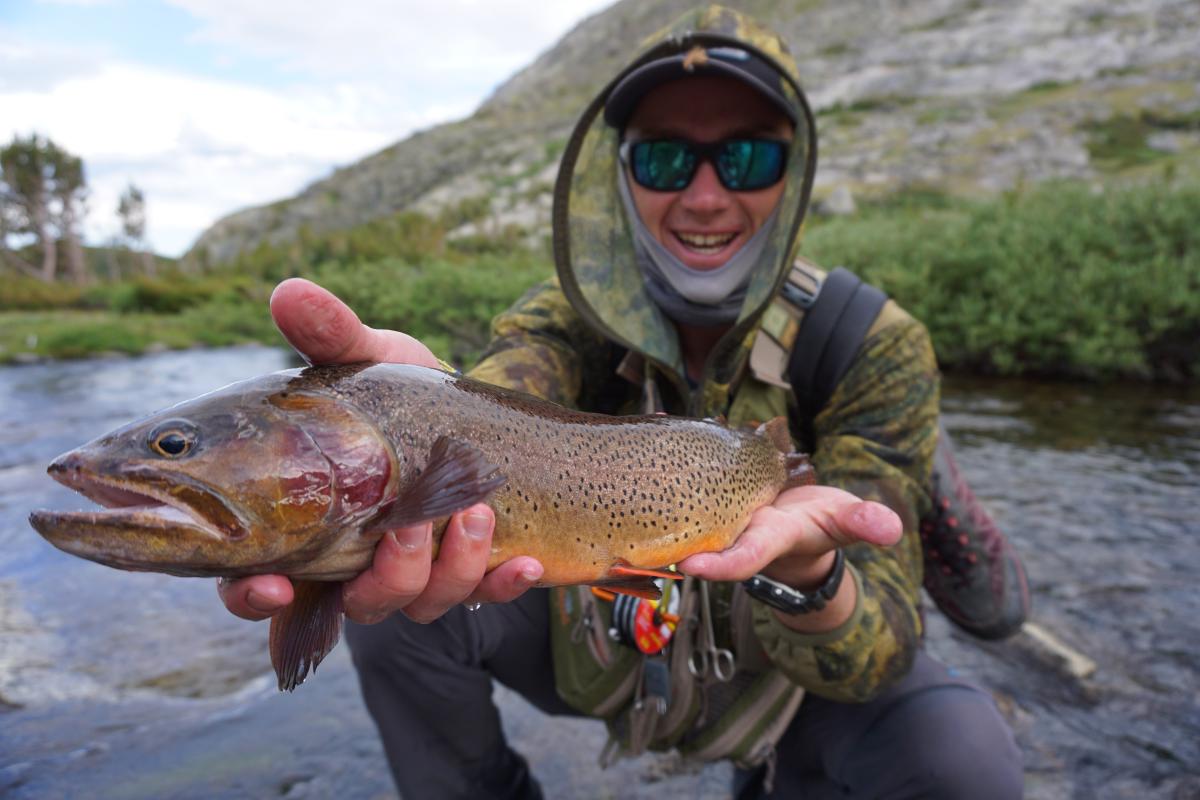