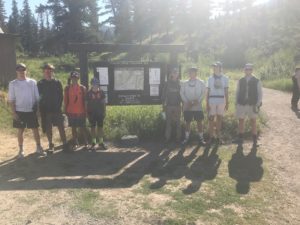 It is hard for us to believe, but the Yellowstone Adventure is wrapping up our time in the Park. The past few days have been action packed, and absolutely flew by.

We started our final backcountry of the trip by dividing our group into two groups. The first group set out for the upper Lamar Valley to camp along the confluence of Cache Creek and the Lamar River. Our goal was high numbers of 10-14 inch native Yellowstone Cutthroat trout. The first day of fishing was slower than usual, but it certainly will not be a day any of us forget any time soon. On our hike into the backcountry we encountered a massive portion of the Yellowstone heard of Bison migrating down into the Lower Lamar Valley. The Yellowstone heard of Bison was the last wild heard of Bison in the world, and has since been used to repopulate other portions of their native range. A quick detour off trail to avoid the hundreds of Bison left us with a perfect view of them as they stampeded by. Watching as they thundered by with the entire Lamar Valley as the backdrop was a spectacular site. When we arrived at camp we quickly set up and set out on the lower section of Cache Creek. Everyone in the group caught some fish, including some really nice 14-16 inch cutthroat at the Lamar confluence, but the fishing was slower than we expect from this stretch. As we made our way back to camp for dinner Will Lillard set off upstream to scout some deep holes full of colder water and more fish. Just as he was exiting camp he looked up to see a mama Grizzly and her two cubs on the other side of the river. He followed them upstream as they munched on plants and cooled off in river. The bears were heading away from camp, but right toward where the group planned to fish the next day. With the slow fishing downstream and a Grizzly upstream we made the decision to exit that backcountry a day early to join up with the other group up Slough Creek. Our decision proved to be a good one as the fishing on Slough Creek was heating up just as we joined back up with the other half of our group. Slough Creek is known for its big cutthroat that rise to well presented flies. The table was set for the group to put all their new fly fishing skills they have been practicing to the test. With the high water the group tied on some heavy streamers and dredged them through the deep pools. The results were instantaneous as several large fish were caught in the first few minutes. A lingering storm kept shade on the water, but never actually rained on us for more than a minute at a time. It was a perfect day for streamer fishing. Everyone in the group had several large fish hooked. 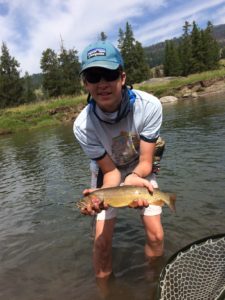 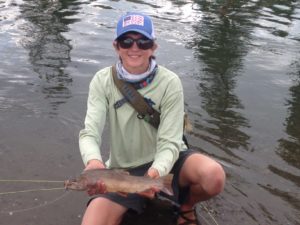 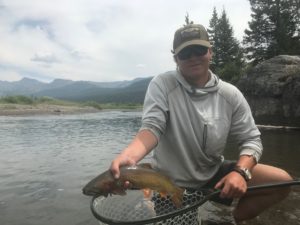 Still excited from yesterdays fishing we hiked out of the backcountry this morning. Tonight we head to our front country camp on Pebble Creek whee we are planning a afternoon spent catching some brook and rainbow trout for tonights fish fry. Tomorrow we start making our way back down to Jackson for some rafting, a service project, and a day floating the Snake with guides from World Cast Anglers. But first we will spend one more day in the park at Grant Village where we will have the chance to catch some of the largest fish in Yellowstone out of Yellowstone Lake. We will send out another update at the end of the trip. 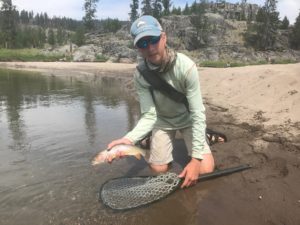 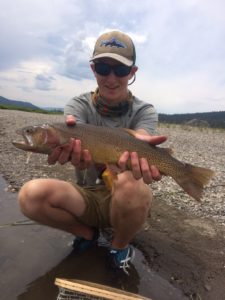 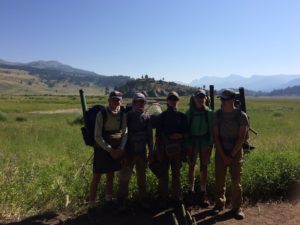