Greetings from Yellowstone. The last few days have been action packed and full of adventure in the backcountry and frontcountry of Yellowstone’s Lamar Valley.

Monday morning the group had a leisurely start at the Gardiner river campground, which started with a delicious hot breakfast of pancakes and sausage. Once everyone had gotten their fill, we broke down camp and headed out to the kickball field for a rematch from the day before. Then we hopped back into the van and went to our next camp site at the scenic Soda Butte river. At our campsite the kids had the opportunity to fish the Butte as well as a smaller trout stream which meandered right through the campsite called Pebble Creek. We got to the site just in time for the evening hatch and once everyone ate dinner, the group hit the water. Everyone was able to land a number of fish both at Soda Butte and Pebble Creek. 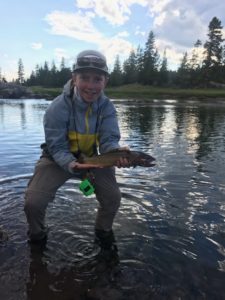 The next morning once everyone was awake the group split up and fished the Soda Butte on a lower section away from the campground while the other group went and tried their luck hiking a bit further up into Pebble Creek, where the fish get much larger than the section through camp. After a full afternoon of fishing, the kids got back to camp where we ate a big dinner and prepared for our journey into the famous Slough Creek Backcountry. Everyone went to bed fairly early, in preparation for the long hike into Slough.

Wednesday morning, everyone loaded their packs into the trailer and we headed to the Slough trailhead. On our way there we had a grizzly bear sighting from the van! Which is a rare sight for the front country and the whole group was pretty excited. Then once we reached the trailhead, the group split in half. The first group headed five miles into Slough Creek to fish for huge cutthroat, who were fairly under pressured and ready to eat our flies. Everyone caught a big fish within the first couple of hours at the backcountry campsite. The other group stayed at the front country of Slough and fished the area below their campground. This group had a little bit more of a challenge in the front country, due to the heavy pressure it receives from fishermen in the park. However, once it started to get dark and the river cleared up, the caddis hatch started up and the front country group ended up catching multiple big fish. 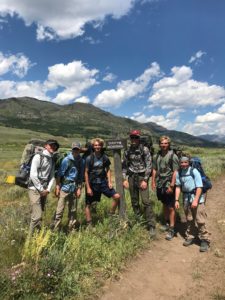 The next morning our group in the backcountry hiked even further up slough to the fourth meadow where we were able to fish world class waters without seeing any other fishermen the whole day. All of the kids were able to catch some monster cutthroat, and a few even caught the biggest trout they had ever landed on the fly. The other group spent another day in front country Slough fishing nearby waters such as the Yellowstone before preparing for their hike into the backcountry.

After two days of world class fishing in the backcountry, the second group hiked out and met up with everyone else. Once everyone was loaded into the van, we made our way up to the famous Madison River, where we will spend two nights fishing and preparing for our service project and float fishing trip on the South Fork of the Snake.