Our group has just exited our final round of backcountries and the final days of the trip approach us. Before our round of backcountries, we fished some new water, including rivers and lakes containing Arctic Grayling and Westslope Cutthroat on the western edge of the park. In the evening, we huddled around cozy fires for evening feats and smores after lingering thunderstorms cooled off the park. We then had one day of backcountry prep on August third before heading into our four-night backcountry session on the mourning of the 4th.

Again, we split up into two groups of 6 to cover a multitude of waters, with the first group hiking nearly 35 miles from Old Faithful to the south boundary of Yellowstone National Park. Our first day consisted of 12 miles of hiking to the top of the continental divide, by far our longest hike of the trip. We stopped 4 miles in for lunch and some fishing along the Firehole River. Although these  Brook Trout weren’t large, they made up for it with a plethora of blue, pink, and red halos splattered on a dark green back. These fish had to be the most beautiful fish we had seen all trip. After our lunch break, we ground out the final 8 miles of mostly uphill terrain to our campsite located in a picturesque high alpine lush meadow lined with rocky outcroppings. We woke up the following morning to a cold rainy day, a trend that we started to get used to. We hiked four more miles to the headwaters of a remote river high up in the Snake River drainage. That afternoon our group hiked to the legendary Mr. Bubbles, a hot spring that has temperatures barrable enough for hikers to use it as a natural hot spring, and boy did it feel good. With the group soaked and temperatures close to freezing, we spent nearly an hour recharging our legs from the nearly 20 miles hiked over the previous days. 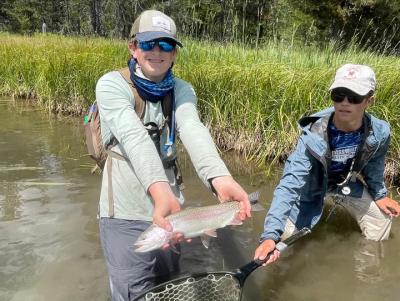 We woke up on the morning of the 6th to yet another cold rainy day, but this time we embarked on an 8-mile hike. Today’s hike had some of the most beautiful scenery of our Yellowstone Expedition. We encountered three large waterfalls plunging over 50 feet, surrounded by large pines and immense foliage that resembled the forests of Washington, Oregon, and British Columbia. Along the trail, we also crossed numerous springs, some cold and some hot, that nearly tripled the size of the river. By late afternoon we had arrived at our campsite for the third night in an immense meadow with large mountain ranges lining the sky in all directions. The next two days are where we focused most of our backcountry fishing effort, as this section of the river has some ginormous fish. After some success fishing in the afternoon, the rain intensified and forced us to retreat to camp. The following day, we saw the sun for the first time in 3 days which lead to some spectacular opportunities on some of the largest trout we encountered on the trip. It just so happens that this is also the hardest fishing on the trip requiring accurate casts, drag-free drifts, and stealthy maneuvers. Although none of the large fish were caught on camera, the group hooked or had eats from several, which is quite the accomplishment on this stream. That night, we enjoyed our final night in the backcountry with some delicious buffalo chicken quesadillas around a warm fire, which had been prohibited at our previous campsites. This morning we hiked the final four miles finishing our 33-mile hike. This hike had to be one of the coolest in Lillard history, and we encountered some geologic features and scenery that very, very few people see. Three days of rain and temps in the 40s never waivered our group's spirits and only helped us soak up the memories.

After dropping off the thru-hike crew at their trailhead, the second group explored some of the most remote regions of Yellowstone. To get there, we had to drive through the South entrance and leave the park to enter the wilderness through Grand Teton National Forest. Our first two nights were spent on a very isolated lake near the south boundary of the park. The trail to the lake was full of ripe huckleberry bushes, a treasure only found in the higher altitudes of the west. After picking and eating our way to camp, we set up quickly and got to fishing for the afternoon. The lake was serene and beautiful, and the fish were eager to eat. We managed to land many pretty Yellowstone cutthroat before dinner. After dinner, we fished until the mosquitoes drove us back to our fire at camp. 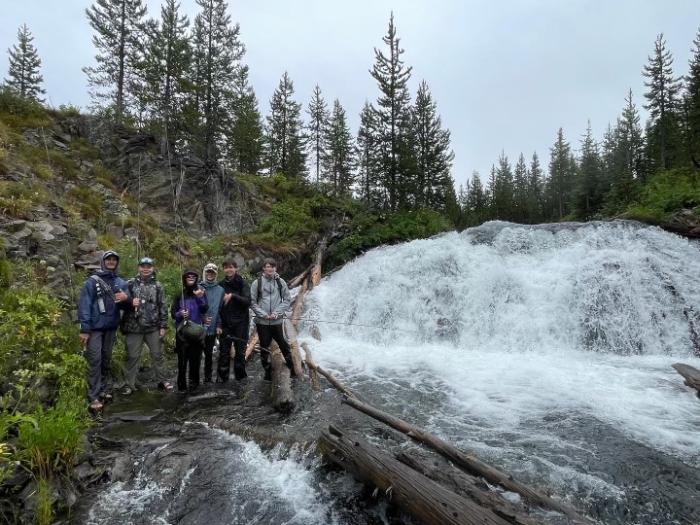 Eager to explore, the next morning, we set out to fish the outlet of the lake on the far side. After some mild bushwhacking, we arrived, and the fishing did not disappoint. We were greeted by many ravenous cutthroats living at the foot of each large waterfall on the outlet stream. The overcast skies and intermittent rain made for some excellent streamer fishing. The constant action distracted us from the cold, but after a while, we headed back to camp to warm up by a fire. We went to sleep early, knowing we had a long day ahead of us.

On the third day, we hiked out to our van early and quickly turned around to re-enter the backcountry farther down the dirt road. We filled up our water bottles and took a short lunch/fishing break at Cave Falls, a beautiful waterfall on the aptly named Falls River. In order to get to our next campsite, we needed to ford the Falls river and hike another 4 miles. We accomplished this in under 2 hours, an excellent pace. After setting up our tents, our old friend rain returned but it did not keep us from having a great time huddled around a fire making dinner that evening. It eventually cleared around sunset, which made for a beautiful sky that night. On the final morning, we got on the trail early, knowing that the biggest fish of the trip was likely to be where we were camped the final day/night. The sky looked dark and stormy early but cleared up to reveal the sun just as we got to camp. We rigged up in earnest, knowing our best chance at a large rainbow trout was in the cold, crystal-clear waters that meandered through the meadow across from camp. While the fish were present, they seemed to be a little on edge; several large rainbows were landed, and several others evaded capture or spooked, shooting into the depths before we could present a fly to them. Even with more difficult fishing, the group was stoked to see such large fish as well as have beautiful weather for the first time in a few days. We capped the night with Backcountry Thanksgiving, an all-time favorite LFFE backcountry meal. At camp, we were able to reconnect with the other backcountry group and catch up. After a bit of fishing, we hiked out this morning at Mach 1, completing the 4+ mile hike in under an hour and a half. The boys in this group are incredible, toughing out tough trails and even tougher weather with a smile on their faces and nothing but gratitude for an experience we will never forget. 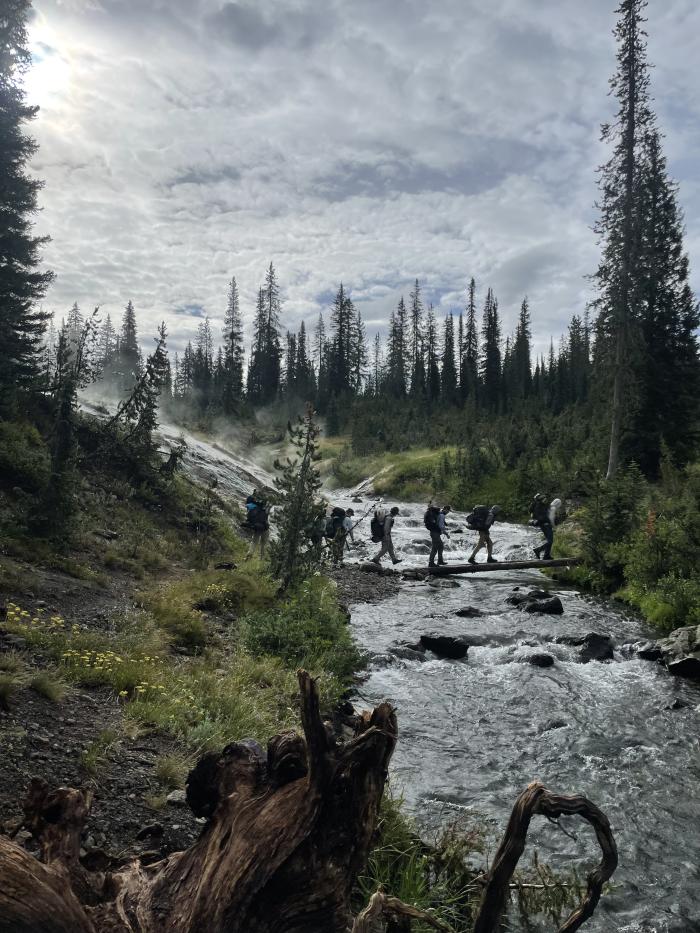 With the end of the trip nearing, we are again staying at Lillard Headquarters in Ennis, Montana, where we enjoyed some pizza and laundry. Tomorrow we are floating with Montana Trout Fitters on the Yellowstone River in the picturesque Paradise Valley, with large mountains and larger trout. This section of Yellowstone was severely impacted in the June floods that made national news. Thankfully, extensive cleanup has occurred, allowing the public to enjoy the world-famous river once again. After the float trip, the group will enjoy a well-earned banquet dinner, hot showers, and a dip in hot springs at Bozeman hot springs campground.

We are thankful for the chance to lead this trip for such a great group. They explored several new water leading to some phenomenal fishing and even more spectacular scenery. They were always ready for the adventure and grateful for the opportunity to explore all Yellowstone had to offer.

Singing off for the last time,

Will, Ethan, David, and the crew.