Howdy from Lach Leven campground in Paradise Valley, Montana! Our last week has been filled with huge fish, beautiful scenery, and even more exploration of Yellowstone National Park. Today the group will cap it all off with a float on the Lower Yellowstone River in drift boats with guides from Montana Troutfitters. 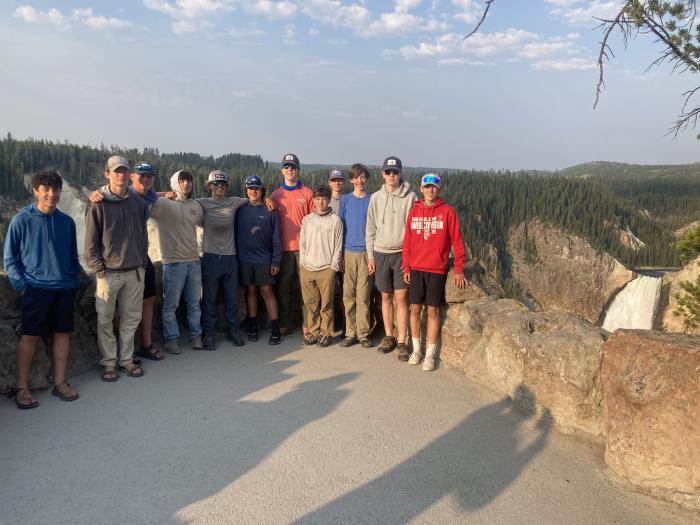 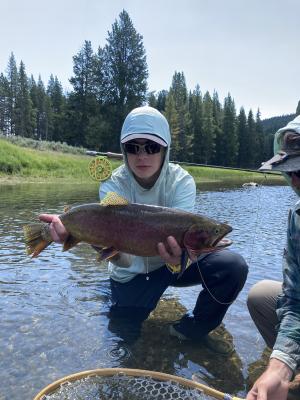 After departing the Slough Creek backcountry, we took a much-needed “refreshment day,” which included showers, laundry, and a visit to a gas station and fly shop to replenish supplies of snacks and fly patterns that had been working especially well. We then headed to a little park in Gardiner, MT, to play a few hours of ultimate Frisbee and enjoy some pizza from a local restaurant. We then spent the last few hours of daylight fishing the Gardner River in the park, targeting Brown Trout as well as Cutthroat Trout for the first time this trip. The heat made things tough, but our group persevered and caught several nice fish. The following day we packed up camp at Pebble Creek early and began our drive to Bridge Bay campground on Yellowstone Lake to fish the Upper Yellowstone River, a fishery that had been closed to fishing since September of last year. The Upper Yellowstone is a traditionally challenging fishery. Its large, wide water with few features can make it difficult to read, and there is little room for a backcast, making casting a real obstacle. Yet, the Upper Yellowstone holds some of the biggest fish in the park, which are a real treat to catch — it’s not every day one gets to sight cast at two-foot Yellowstone Cutthroat with huge foam flies! We arrived at 8 a.m. on opening day, and the fish were ready to eat. For a river that typically only produces a handful of fish for our groups each season, we smashed it, landing more than ten of its massive cutthroat over two and a half days. 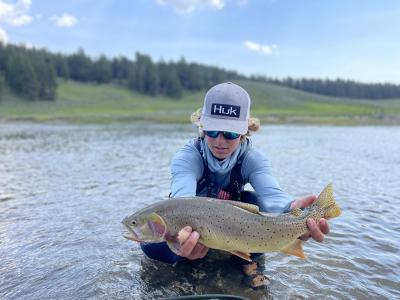 After our second day fishing, the Upper Yellowstone, we packed our packs once again in preparation for our second backcountry in the Upper Snake at the park's Southern border. The Upper Snake, which we fished just a few miles from its headwaters, is a trout fishery famous for its own species of fish, the native Snake River Cutthroat Trout, which our group was lucky to catch many of, with the occasional Brown Trout as well. After a five-mile hike with our packs, we arrived at camp and got fishing. Despite low water and high temperatures, the students still succeeded, catching handfuls of beautiful, healthy fish, many of which still held their vibrant spawning colors. We spent the final night in the backcountry sharing Lillard’s famous Buf Mac and stories before hitting the sack. 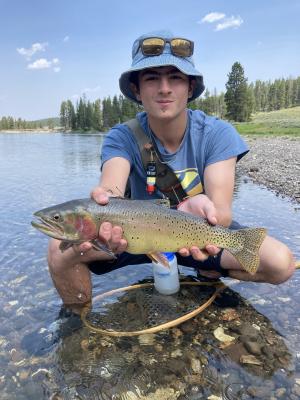 Yesterday we drove from the Southside of the park to the Northside, leaving the park for the last time! We stopped to see some attractions along the way, including the Grand Prismatic hot spring and Yellowstone Falls, both of which are true sights to see. We are now getting ready to wrap things up, with some wade fishing of the Lower Yellowstone tomorrow before our banquet dinner, showers at the Bozeman Hot Springs, and eventually our boys’ flights home the following day! While I’m sure you’re all excited to see your sons again, we sure will miss their energy. They have been a remarkably close, positive, and enthusiastic group, and it has been a pleasure to see them grow not only as anglers but as outdoorsmen and as young men in general. We hope to fish with them again someday soon!

Until then, I wish you all the best and, of course, tight lines!

Eli, Ed, Jack, and the crew