We only had one day in between our backcountries, and it is safe to say that we made the most of it. For most of the day, we fished a tailwater section of the Colorado River just below Shadow Mountain Reservoir. This part of the river was full of Browns, Rainbows, Cutthroat/Rainbow hybrids, and even Kokanee Salmon. We got back to camp excited about the fishing that day but even more excited about the backcountry fishing to come.

For our second backcountry, we ventured into one of the drainages that makes up the headwaters of the Colorado River. Half of the group broke up the hike and fished the creek through a splendid meadow on the first day, while the second group booked it up trail and fished the first of several lakes that lay in the drainage. That night we had stir-fry and got ready to hike a little further the next day. The next day the group that fished the meadow moved up to the first lake to fish, while the other group hiked another mile to second lake.

The second day went even better than the first, with both groups landing tons of fish. Since we could keep the resident Brook Trout, we fried up a few of them for a nice appetizer before dinner. We ate Chili Mac and then made plans for another full day of fishing the following day. The next day we all fished the second lake together, and caught several hundred more trout.

For our third and final full day in the backcountry, we caught tons of fish up at the lakes and cooked a few with our dinner. For dinner we made Chicken Pesto Pasta, but we added some of the trout, making our very own backcountry surf & turf. The next day we exited the backcountry, and did our routine of ice cream, showers, and laundry.

We are spending two nights outside of the park before heading down to Kremmling, CO, where we will do our service project and go on our float with Cutthroat Anglers. We will be camped at a popular put-in named the "Pumphouse" on the Colorado River, where we will also have the opportunity to walk/wade fish. We will spend a total of three nights in Kremmling before heading to our final stop in Silverthorne, CO! 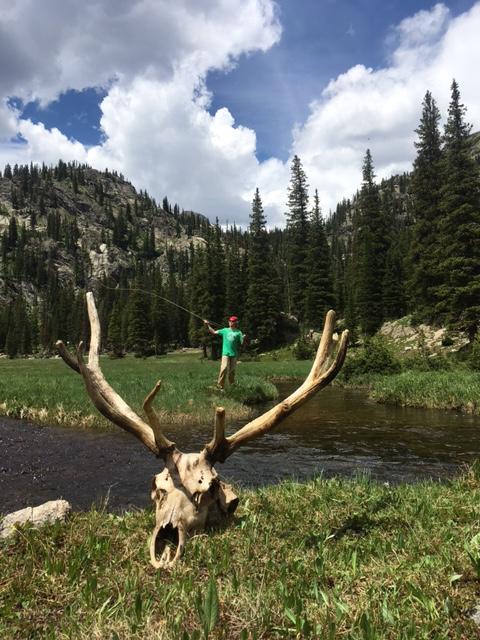